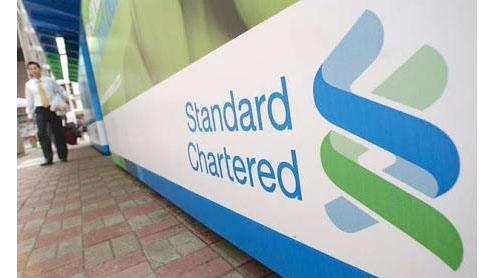 Standard Chartered agreed to pay a $340m (£217m) fine on Tuesday in a humbling settlement with a United States regulator over Iranian money-laundering charges.

Standard Chartered agreed to pay a $340m (£217m) fine on Tuesday in a humbling settlement with a United States regulator over Iranian money-laundering charges.In the settlement, the bank admitted the value of transactions at fault amounted to “at least $250bn”, not $14m as it had said. Last week the New York financial regulator claimed that the “flagrantly deceptive actions” by the British bank had left the US “vulnerable to terrorists, weapons dealers, drug kingpins and corrupt regimes”. The charges wiped more than 20pc off the bank’s share price in 24 hours.

The agreement is only with the DFS in New York and is not the co-ordinated settlement with all US regulators the bank had hoped for. “We will continue to work with our federal and state partners on this matter,” the DFS said.  Standard Chartered has agreed to an extraordinary level of supervision by the DFS to salvage its Wall Street bank licence and avert a public showdown over its Iranian operations.“The bank shall install a monitor for a term of at least two years who will report directly to the DFS and who will evaluate the money-laundering risk controls in the New York branch and implementation of appropriate corrective measures,” said the DFS in a statement. “In addition, DFS examiners shall be placed on site at the bank.”

The statement added that Standard Chartered “shall permanently install personnel within its New York branch to oversee and audit any offshore money-laundering due diligence and monitoring undertaken by the bank”.  Standard Chartered said the deal was a “pragmatic decision in the best interests of shareholders and customers.” It said it would continue to “engage constructively” with all US authorities.Andrew Cuomo, governor of New York, hailed the deal as a victory for the newly-established DFS. “This state and nation are still paying the price for a failed regulatory system and that must not happen again.”Tonight, one of Standard Chartered’s leading investors said: “This fine is $335m more than is justified. But it is a good result as far as market expectations are concerned.”

The fine was less than the $1bn analysts had warned could be imposed. Otherwise the settlement represented a climbdown for the bank, which could still face fines from other US regulators.Last week, the bank said it “strongly rejects” the DFS’s order, which alleged it had “schemed” for 10 years to bypass US sanctions on Iran. It admitted that some of the transactions it completed on behalf of Iranian clients did not comply with US sanctions. But insisted 99.9pc followed the rules, including the so-called “U-turn” laws that exempted some transactions from sanctions. It said the DFS’s interpretation of the “U-turn” rules was “incorrect as a matter of law.”

During days of negotiations, Standard Chartered and the regulator were a “gulf apart on the charges”. Peter Sands, chief executive, flew to New York to take charge of the talks. Insiders said the bank’s position had shifted to “damage limitation” – ensuring that a public debate of the charges was avoided.Standard Chartered shares recovered a further 36.5p to £13.70 on Tuesday on the hopes of a settlement, but they are still below the £15.67 they traded at before the DFS published the order.On Wednesday, the shares opened up 4pc at £14.21 in London after rising 6.6pc in Hong Kong. – Telegraph