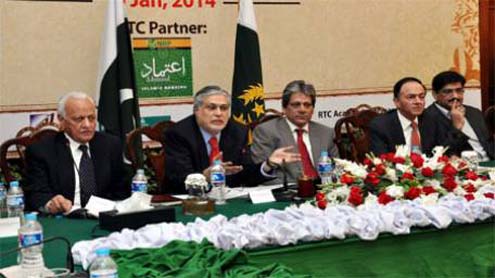 KARACHI: Federal Finance Minister Ishaq Dar Wednesday urged to further push the process of Islamisation of banking and finance in Pakistan claiming that a committee had already been constituted on the subject with a fairly broad mandate assigned for realisation of its cherished goal.

He said this while addressing at the roundtable conference on ‘Potential of Islamic banking in Pakistan’. The event was also attended among others by Sindh governor, State Bank governor, finance adviser to Sindh chief minister, honourable foreign delegates, religious leaders and leading bankers and industrialists.

The committee which would suggest by December 31, 2014 a road map and timeframe for progression of various phases of Islamic banking in the country, has initially set for itself, the following key areas of investigations, where their recommendations will be finalised at the earliest, which includes removal of all difficulties being faced by the existing Islamic financial institutions in the operations vis-à-vis conventional institutions, design of new products that may enable government to conduct its resource mobilisation operations through Shariah compliant methods.

“A review of conventional banking system should be made from the point of view of identifying the departures from the approved modes of financing and recommendations for bringing it in line with Shariah compliant methods, and examining the possibility of organising futures markets on the basis of Islamic principles of finance,” the minister said.

The government would provide Islamic banks every possible help including changes in legal and regulatory framework, if any needed, to initiate such projects either by themselves or in collaboration with reputed builders and investors.

The minister asserted at present the Islamic finance industry of Pakistan consists of 19 Islamic banks with a network of 1,200 branches spread across 80 districts, 27 Mudaraba companies, 15 mutual funds and five Takaful companies.

The Islamic banks should tap these largely unbanked markets through their asset-based and risk sharing products and contribute in catalysing growth in real economy. Similarly the linkages between Islamic banks and microfinance institutions could be instrumental in channeling the surplus liquidity of Islamic banks towards meeting the financial services needs of the low income population.

This would help Islamic banks improve their perception among the masses and facilitate the government in achieving Millennium Development Goals, which are largely in line with the basic philosophy of Islamic finance such as facilitating development of a fair and equitable economic system ensuring broad based welfare and well being of the masses.

The prime minister himself in his speech at World Islamic Economic Forum in UK expressed the resolve and desire of his government of making every possible effort to make Pakistan a leader in Islamic finance.

He noted with concern that during the last 15 years or so, there has been a lull in the patronage for the promotion of Islamic finance at the government level in the country. Indeed, it is disconcerting to note that there has been reversal in the focus of 12 modes of financing that were approved as Islamic products, as many blatant violations were observed such as charging mark-up on mark-up through the so called re-capitalisation of over due amounts.

Despite this, it is worthy to point out that the movement Islamic finance has moved forward and a sizeable share of assets in the banking system is based on Islamic finance. Apart from a number of Islamic banks operating in the country, many banks have opened Islamic windows that enable people to access the Shariah compliant financial products.dailytimes