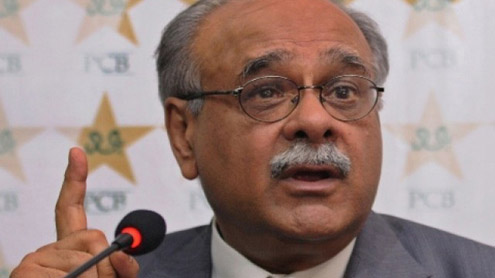 Pakistan Cricket Board (PCB) on Thursday announced its conditional support to the International Cricket Council (ICC) revamp which rests power in the hands of India, Australia and England in the way the governing body is run.

In a statement released to the media following the conclusion of the ICC Board Meeting in Dubai, the PCB said it had agreed to the revised ICC resolutions only on the conditions that it would get bilateral series with all members from 2015-2023. “We had completed the discussion, consultation and negotiation phase with regard to the revised resolutions. It was important for us to get assurances on bilateral cricket with all Boards, especially India, which we have now received. The detailed Future Tour Programs (FTP) are now being finalized with all, especially India,” PCB chairman Najam Sethi said in the press release.

Sethi clarified that Pakistan had decided to change its stance after “the resolutions have been diluted considerably from when these were first presented, and are now unobjectionable.” According to the chairman, the PCB will soon reveal its “achievements” made during the ICC meeting. Days before the ICC meeting which concluded today, Sethi claimed Pakistan missed out on the opportunity to have a major say in the affairs of the ICC after Zaka Ashraf took over as chief from him for a brief period. “The ‘Big Three’ offered us to join in and form the ‘Big Four’.

It is quite unfortunate that the talks I started with them were not pursued further by the Pakistan Cricket Board when I wasn’t around,” Sethi said before leaving for Dubai for the meeting. In February this year, Prime Minister Nawaz Sharif removed Zaka Ashraf as chairman of the board, appointing an 11-member committee, headed by former interim PCB chief Najam Sethi, to run the affairs of the PCB.

Islamabad Cricket Association president Shakil Shaikh, who is also one of the members, said Zaka Ashraf was removed because of “mishandling Pakistan’s case in the recent changes brought in the ICC.” Pakistan abstained from the voting in the ICC Board meeting in February in which the three biggest cricketing nations — India, Australia and England — got a majority of the powers in the sport’s governing body, securing 9 votes from the 10 full members. -Dawn