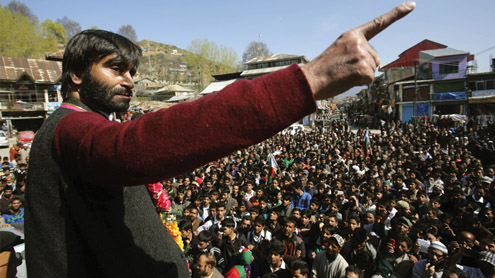 The third leg of India’s nine-stage polls registered a high voter turnout in Delhi on Thursday while the southern state of Kerala, a comfort zone for mainstream communists, and some Maoist-dominated regions of Chhattis garh mocked what appears to have become a TV-contrived wave for the Hindu right in the polls so far.

Maoist-hit Bastar constituency saw the lowest turnout of 51.4 per cent, which was still higher than its 2009 performance with about 47 per cent voting. A star candidate here this time is Soni Sori, a tribal schoolteacher who has been accused of being a Maoist supporter, a charge she denies. Ms Sori was tortured and sexually brutalised in police custody, triggering global condemnation by rights bodies. An Aam Aadmi Party candidate, she is currently out on bail. Chhattisgarh, Odisha and Bihar reportedly witnessed violence linked to Maoists, who oppose the polls.

Three security men were said to have been killed. Reports said a high voter turnout was recorded in the 91 constituencies in 14 States and Union Territories that went to polls on Thursday, with Chandigarh witnessing the highest percentage of 74. The turnout in Delhi was 64 per cent, up by 12 per cent as against 2009 elections. The voter turnout this time was substantially higher over the last Lok Sabha elections in all the constituencies. Muzaffarnagar and Shamli in Uttar Pradesh, which witnessed communal riots in August 2013, recorded “above average” voter turnout of 67.78 per cent and 70.85 per cent, respectively.

The 10 seats of Uttar Pradesh, which went to polls on Thursday, reported a record turnout of 65 per cent as compared to 51.30 per cent recorded in the last LS polls. Kerala, which went to polls in single phase on Thursday, recorded 73.4 per cent voter turnout, up from 73.2 per cent last time. In Odisha, Maoists reportedly snatched electronic voting machines and took away the battery of one of the machines. Election Commission has decided to postpone polling in 22 places in Bihar — 19 in Jamui, two in Nawada and one in Gaya — as polling personnel were not sent there keeping in mind their safety. Jharkhand’s four seats witnessed 58 per cent turnout, which was higher than the 50.89 per cent recorded in last general elections.

Madhya Pradesh, where nine seats went to polls, saw an average turnout of 54.13 per cent, while in Haryana, an Aam Aadmi Party bastion, it was 65 per cent. All the 10 seats of Haryana had a single-phase poll. In the last elections, the turnout in Haryana was 68 per cent. The Jammu seat also saw an impressive turnout of 66.29 per cent — 17 per cent higher than in 2009. The Andaman and Nicobar Islands had a record turnout. Till the last count, it was 67 per cent, higher than last time’s 64.15 per cent. But in Lakshadweep, the turnout was 71.34 per cent, lower than last time’s 85.98 per cent. -Dawn