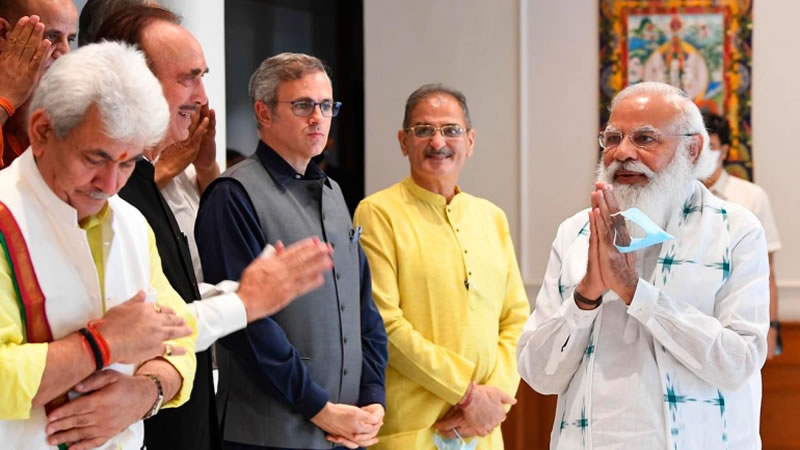 Indian Prime Minister Narendra Modi met senior politicians from Occupied Kashmir at his residence here on Thursday and both sides hoped for the restoration of democracy for a people whose lives he wrecked two years ago.

Of the 14 Kashmiri politicians Mr Modi invited to the heavily advertised “surprise” meeting, nearly everyone came out smiling from it. There was no mention of the fate of the Hurriyat Conference although at least one participant — former chief minister Meh­booba Mufti — told reporters she had pressed for the release of all political prisoners. She was also the one to publicly speak about the restoration of the abrogated Article 370.

“We will struggle for 370, be it months or years. We didn’t get this (special status) from Pakis­tan, but from India, Nehru. There can be no compromise on this,” Ms Mufti said.

In their comments to the press after their three-hour meeting with the prime minister and his senior aides, Ms Mufti and former chief minister Omar Abdullah said they were encouraged by reports of backchannel talks between India and Pakistan.

They also referred to the SCO [Shanghai Cooperation Organi­sa­tion] meeting in Dushanbe where the national security adv­isers of both countries signed a joint declaration with SCO members against “international terrorism”, “extremism”, “separatism” and “religious radicalism”.

There were some differences about the way ahead to restore democracy in India-held Jammu and Kashmir. Mr Modi wants to carry out a delimitation of the constituencies before the prop­osed polls with the promise of restoring statehood to the occupied dismemb­ered erstwhile state, currently reduced to a union territory since August 2019.

Among the participants, National Conference leader Farooq Abdullah and his son Omar are former allies of the ruling Bharatiya Janata Party. Ms Mufti was a BJP ally in a government blessed by Mr Modi before their bitter parting.

Reports said Mr Modi spoke about removing “Dilli ki doori as well as Dil ki doori” (distance from Delhi and distance from the heart). He assured them of his commitment to full statehood for held Jammu and Kashmir but at the right time.

Elections can happen soon after delimitation, NDTV said, quoting sources, and “most participants expressed willingness for it”.

“The main focus of the meeting was to strengthen the democratic process.

Home Minister Amit Shah, while announcing the decision in parliament, had said that full statehood would be “restored at an appropriate time”.

After Thursday’s meeting, Mr Shah tweeted: “The future of [occupied] Jammu and Kashmir was discussed and the delimitation exercise and peaceful elections are important milestones in restoring statehood as promised in parliament.”

Mr Modi, according to sources, “patiently heard suggestions and inputs from all participants” and expressed happiness that all participants shared their frank and honest views. “It was an open discussion which revolved around building a better future for Kashmir,” NDTV said, quoting the unnamed sources.

This was Mr Modi’s first major outreach since August 2019 towards political leaders who have been severely critical of changing the special status of held Jammu and Kashmir.

Many of the leaders attending the meeting had been detained as measures to prevent any protests over the sweeping changes.

At the meeting, it was also decided that held Jammu and Kashmir Lieutenant Governor Manoj Sinha would set up a committee to review cases of political prisoners, be it those released — like the Abdullahs and Ms Mufti — and those still in detention.

The meeting came days after Mr Modi declared himself as a defender of democratic freedoms to an assembly of G7 leaders in Cornwall.

There are reports that leaders of the anti-China Quad could assemble in Washington for their first high-profile face-to-face meeting in the Fall. Should the subject inevitably turn to human rights, Mr Modi could find himself in a happier position after Thursday’s meeting.

This article appeared originally on Dawn.

India to take back illegal migrants from UK in return for 3,000 visas