by ToP
in Featured, Markets
0 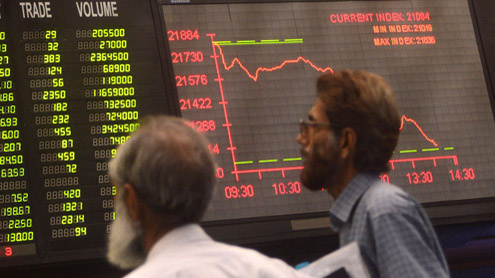 Stocks continued to head north on Thursday, with the KSE-100 index going up by 309.53 points to close at record 29,250.54 points. The volumes of Rs 15.8 billion stood at eight-month high and the market capitalization of the exchange crossed Rs 7 trillion.

All credit to foreign investors who have gone wild on Pakistan equities. Overseas investors bought $6.49 million worth stocks in a buying spree of shares valued at $56.3m in the last eight days alone. Fahad Qasim at Top line Securities observed that April had turned out to be an eventful one for the Pakistani stock market, which is waiting the likely increase in Pakistan’s weight from 4.4 per cent to around 8.9 pc in Frontier Market (FM) 100 Index coupled with the overwhelming response to dollar bonds. The developments have attracted global money managers.

Resultant, above average foreign inflows materialized in the last few days, with the stock market yielding 14. 6 pc return in 2014 YTD. Analyst Fahad Ali at JS Global said that the bulls dominated the index on Thursday. PSO outperformed the market on anticipation of resolution of circular debt and rumors of increase in dealer margins. The government successfully issued $2 bn Euro bonds and news of World Bank to provide $10 bn to the country for development projects over the next five years were sentiment boosters.

Analyst Samar Iqbal stated that market continued to head north on healthy foreign flows and the rupee’s strengthening, which kept interests alive in OMCs, pharmaceuticals and the auto sector. Renewed interest was seen in PSO, Engro and NBP. Mid cap stocks led the volume where LPCL witnessed highest turnover for yet another day at 60m shares. Analyst Ahsan Mehanti at Arif Habib Ltd. commented that the bullish rally continued amid investor interest in selected stocks across the board on strong foreign interest in oil stocks. -Dawn