Virat Kohli will step down as captain of the Indian Twenty20 side after the upcoming World Cup in the United Arab Emirates and Oman, the player said on Thursday. 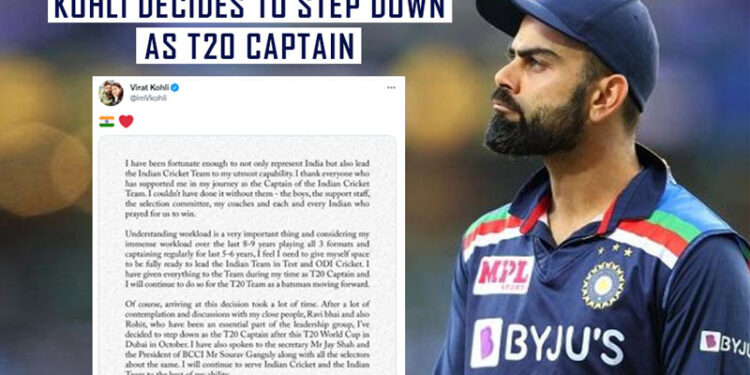 Virat Kohli, also the team’s batting mainstay, cited the need to balance his workload as he vacated the role which is likely to go to his deputy Rohit Sharma.

“…considering my immense workload over the last 8-9 years playing all 3 formats and captaining regularly for last 5-6 years, I feel I need to give myself space to be fully ready to lead the Indian team in Test and ODI cricket,” Kohli said in a statement posted on Twitter.

“I have given everything to the team during my time as T20 captain and I will continue to do so for the T20 team as a batsman going forward.”

The 32-year-old said he consulted, among others, Rohit before taking the decision. India is yet to win an ICC trophy under Kohli, while his Royal Challengers Bangalore team continues to chase their maiden Indian Premier League title.

Kohli has a 27-14 win-loss ratio as India’s Twenty20 captain and vice-president of the Indian cricket board Rajeev Shukla said the player made an “immense” contribution as leader of the Twenty20 squad.

“This is his personal decision and we respect it,” tweeted Shukla.

Inaugural champions India will begin their bid for a second Twenty20 World Cup title with a blockbuster October 24 clash with arch-rivals Pakistan in Dubai.