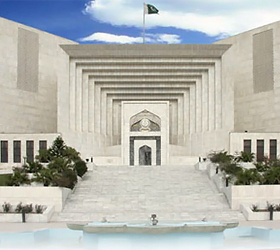 “The cooperation of Bench and Bar is inevitable for quick dispensation of justice” said the Hon’ble Chief Justice of Pakistan Mr. Justice Iftikhar Muhammad Chaudhry while addressing the delegation of Gujranwala District Bar headed by its President Ch. Zaigham Ullah Sansi and comprising other office bearersand members who called on his lordship today i.e. 20-09-2010 in Supreme Court Building, Islamabad.

The delegation discussed with the Hon’ble Chief Justice, the issues of legal fraternity. They further informed his lordshipabout the hardships faced by them regarding the establishment of Special Courts, i.e Drug & FIA Courts in their jurisdiction because they have to travel long. They informed his lordshipthat the National Judicial Policy is being fully implemented because of which quick relief is being given to the litigant parties. They further apprised his lordshipabout bench and bar co-operation in their District, issues arising amongst the lawyers and the District Judiciary are being resolved with the mutual co-operation between the bench and bar.

The Hon’ble Chief Justice also praised the services of Gujranwala District Bar rendered in the days of restoration movements meant for Rule of Law, Supremacy of Constitution and independence of judiciary. They complimented his lordship’s commitment, dedication and selflessness for the cause of justice. They further extended invitation to Hon’ble Chief Justice to visit Gujranwala District Bar. His lordship assured them to visit the Bars in due course of time – Supremecourt