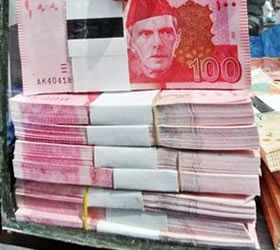 However, official statistics revealed on Monday that the country’s current account deficit posted an increase of 48.66 percent or $309 million to $944 million in first two months (July-August) of FY11 against $635 million during the corresponding period of last fiscal year.

The statistics show current account deficit without official transfers crossed one billion dollar mark and reached $1.106 billion during the first two months of FY11 as compared to some $637 million during corresponding period of last fiscal year ie 2009-2010.

Economists expressed deep concern over the rising trend in the current account deficit saying that high deficit would put a negative impact on the already depleting forex reserves and the country’ ailing economy, which is facing worrying situation after floods.

“Some pressure on Pak rupee has also been witnessed during last two weeks and the rupee is likely to further depreciate against the dollar in interbank and open currency market due to high demand,” they added. High current account deficit had forced Pakistan to re-join International Monetary Fund (IMF) programme to build its forex reserves, which fell to $6 billion in November 2008. Therefore, it is expected that the upward trend in current account deficit may compel the government to obtain new loans to meet the requirement of rising foreign payments, they said.

Increasing trade deficit, slow growth in exports and high imports coupled with rising oil and food import bill are the chief reasons for rise in current account deficit. The State Bank of Pakistan (SBP) statistics revealed that principal factors responsible for high current account deficit is widening goods and services trade deficit, which surged by 16.25 percent during this period. However, income sector deficit posted some decline in July-August of 2010.

In addition, income sector deficit witnessed a decline of 15 percent or $75 million to $403 million with $589 million payments and $1.156 billion imports. During the first two months of last fiscal year, the country’s altogether income from abroad stood at $562 million as compared to payments of $552 million to the overseas. Overall deficit including trade and services stood at $3.242 billion against the current account transfers of $2.306 billion in July-August. -brecorder