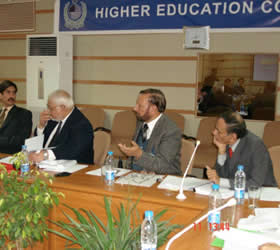 In an unusual move, vice chancellors of 72 public sector universities, along with Chairman of the Higher Education Commission (HEC) Dr Javed Laghari, met the Federal Finance Minister Dr Abdul Hafeez Sheikh to protest against a cut in their respective budgets.

Later at a press conference they threatened that if the government does not give them a supplementary grant of Rs 7.5 billion to pay the 50 percent salaries’ increase announced in the national budget and meet their developmental obligations, both the teaching and administrative staff would go on strike. Khyber Pakhtunkhwa would be the first to go that way, and close all university offices from September 20.

It is sad indeed that the vice chancellors would act like trade union leaders, rather than leaders of the academia whose primary concern must be the promotion of learning. It needs to be noted that for 2010-11 the government, despite fiscal constraints had enhanced the development budget for higher education by 40 percent, adding, over and above a four percent increase in their current expenses as well. That was before the worst ever floods hit vast swathes all over the country, and changed everything. As Federal Minister for Finance, Abdul Hafeez Sheikh, after the onslaught from the vice chancellors pointed out, that a population of over 20 million is waiting for the government’s financial help for rehabilitation.

At a time like this the vice chancellors are expected to understand the huge pressure the calamity has put on the government financial resources. There is no denying that the problems the universities face are quite serious. Not only they are unable to give the pay raise the Finance Minister himself announced in the National Assembly, but there are a number of students studying in foreign universities on HEC scholarships who await monthly stipends that are no longer available, while a question mark also hangs over the fate of some of various ongoing development projects.

Disappointing as the situation is, it calls for some creative thinking on part of these universities’ leaders. An obvious way forward is to set priorities and cut expenditure wherever possible. The available funding should go to projects that are 80-85 percent complete. Those having moved 20-25 percent along the road should be put on hold. As regards scholarships for students studying in foreign universities, the ones whose degrees are near completion must get priority. Efforts can also be made to generate finances through private endowments.

Dr Hafeez Sheikh announced constitution of a committee comprising one member each from his own ministry, Planning Commission, and HEC, and three vice chancellors to review the universities’ budget priorities. However, this committee could not take up the task as the Chairman HEC, with the status of a Federal Minister, refused to participate in a committee headed by the Chairman Planning Commission, of the status of a minister of state. Therefore, the Prime Minister had to intervene to form a new committee headed by the Chairman HEC. Unfortunately, there is no one from the Ministry of Finance in this new committee.

The challenge is to examine ways and means of creating fiscal space for funding students abroad, 50 percent pay rise in salaries and development projects that are near finishing point. Dr Nadeem-ul-Haq has rightly pointed out that universities need to come up with a proper business plan and just not live on official funding. They need to sell excess land to complete their ongoing projects. This would, however, take time. In the meantime, enhanced salaries have to be paid, students on scholarships abroad need disbursement of monthly stipends and contractors await payments of work already completed.

So, the challenge is to ascertain what can be done without jeopardising the quality of education in our public sector institutions of higher learning. The nation expects its finest to come up with a solution to the problem facing the nation and advising the government on how to cope with the worst fiscal crisis that the country is beset with – instead of hurling threats of strikes and closures. -brecorder