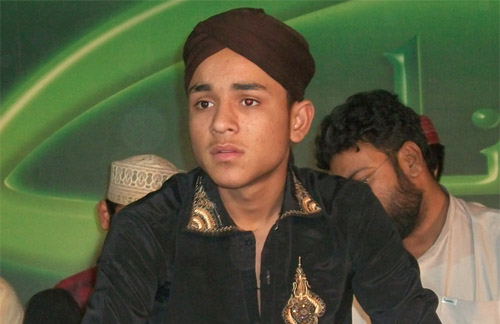 Popular Naat Khawan, Farhan Ali Qadri, was arrested late on Sunday night for allegedly firing indiscriminate warning shots to intimidate a neighboring family he had a spat with a while ago.

“Qadri was copped with a smoking gun in his hand. A case has been registered against him for violating the laws that prohibit displaying firearms, firing, and threatening to shoot people”, a police official told Samaa. A Naat Khawan is a person who recites the Naat –poetry praising Prophet Muhammad (Peace Be Upon Him). ‘Naat Khawani prodigy’, Qadri was born in Jacobabad.

He started reciting naats at the age of five; he used to recite naats in his school, Milad. He shot to nationwide fame for his recital of the Naat “Noor Wala Aaia Hay”. Qadri gained recognition as a famous Naat Khawan and recited naats in various languages such as Urdu, Sindhi, Saraiki and Punjabi; he even recited naats in Bengali and English. The young Naat Khawan has won various awards at national, provincial and district levels. -samaa