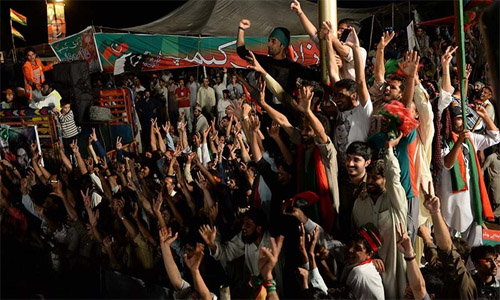 After the August 30 clashes with the police, the number of participants in the Pakistan Tehreek-i-Insaf (PTI) sit-in at D-Chowk has again started increasing. On Sunday, a large number of PTI workers were seen heading towards the venue. The PTI and Pakistan Awami Tehreek (PAT) started their sit-ins at Kashmir Highway on August 15. On August 19, both the parties entered the red zone.

Till August 29, a large number of people from the twin cities participated in the sit-in of the PTI.However, after August 30, when the marchers moved towards the Prime Minister House, and clashed with the police leaving three people dead and over 500 injured, most of the local residents stopped coming to the PTI sit-in. Bilal Ahmed, a resident of Khayaban-i-Sir Syed in Rawalpindi, who was going to the PTI sit-in on Sunday, told Dawn that he believed in a peaceful protest but unfortunately the PTI had gone for an agitation. “All over the world people protest peacefully. They hold protests after getting permission from the administration. However, they only criticise the management of the city if they are not given permission to hold a protest.

“I supported the PTI with the hope that it would promote a new politics in the country. But I don’t know why the leadership of the party took a decision that led to clashes with the police.” He said after the incident of August 30, he decided not to take part in the protest. “However, when Imran Khan took the sit-in participants back to D-Chowk, I decided to rejoin the sit-in because it showed the leadership of the party has realised that they should not go for an agitation,” he said. Naeem Ahmed, a resident of Islamabad and another supporter of the PTI, added that there were lots of differences between the PTI and PAT supporters. “The PAT supporters might not mince a word even if their leadership takes them to hell, but the supporters of the PTI are educated and can differentiate between a right and wrong decision,” he said. “I did not join the PTI for an agitation.

But Mr Awan agreed that after the incident of August 30 the number of participants in the PTI sit-in had decreased. “It is not unusual that after such bloodshed people avoid going to the place of the incident. After a terrorist attack on the Islamabad district courts, in which 11 people were killed, even some of the lawyers stopped going to the district courts for a month,” he said. “Some of the PTI supporters might have frightened because of the teargas, firing and police baton charge. Besides, the walking distance had increased after the sit-in venue was shifted to the Cabinet Division from the D-Chowk.” -dawn