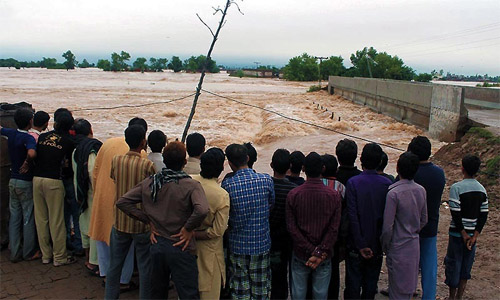 Hundreds of thousands of people were marooned, their houses submerged and livestock washed away as the river Chenab in ‘super flood’ hit 600 villages in Gujranwala and Sialkot regions on Sunday. The Flood Forecasting Division (FFD) predicted high to very high flood in river Indus at Guddu between Sept 13 and 14 and at Sukkur on Sept 15. It urged the authorities concerned to take necessary measures to avert losses to life and property.

Prime Minister Nawaz Sharif visited Sialkot and Chief Minister Shahbaz Sharif several flood-hit villages in the region, but there was little help for the affected people who were left at the mercy of the raging river and its nullahs. A Dawn reporter saw people having taken refuge at the roof of houses and buildings and other higher places in Wazirabad, Hafizabad, Mandi Bahauddin and Chiniot and waiting for help. Eight people were killed and there were apprehensions about many more deaths in the areas. Floodwater damaged crops over hundreds of acres and washed away livestock in many villages. It appeared that people were neither evacuated nor asked to move to safe places before the peak entered the river from India, despite warnings issued by the Flood Forecasting Bureau. There was immediate need to rescue the marooned families and provide them food and potable water.

Its design capacity is 800,000 cusecs. Punjab government officials reported large-scale spillovers at Marala, Khanki and Qadirabad which inundated about 600 villages in the region. According to reports, at least 56 villages in the Sialkot region near Marala, 53 in Sambrial, 25 in Zafarwal, 56 in Pasrur and 89 in Chiniot were submerged. Sialkot city, Wazirabad, Hafizabad, Mandi Bahauddin, Chiniot, Jalalpur Jattan, Phalia and Pindi Bhattian were directly hit by the flood which also damaged a number of roads, bridges and important installations. Five people were killed in Mandi Bahauddin and one each in Sheikhupura, Bhiki Sain village and Daska. At least 16 people were killed in rain-related incidents in Azad Kashmir. The prime minister had aerial view of the flood-hit areas near Head Marala, Sialkot, Sambrial, Wazirabad, Pasrur, Zafarwal, Narowal and surrounding areas from a helicopter. He asked Imran Khan and Dr Tahirul Qadri to end their sit-ins and help the flood-affected people.

He ordered the administration to speed up rescue and relief activities and said his government would not lag behind in helping the affected families. During his visit to the flood-hit areas of Sialkot, Prime Minister Sharif asked the nation to take notice of the elements who were holding sit-ins and obstructing national progress and prosperity. About the flood situation, he said that Chenab was in high flood and there was a similar situation in other rivers, causing enormous losses to crops, cattle and property. He said the government and the armed forces were carrying out relief and rescue work and had evacuated a large number of people from various areas, but added that the situation was ‘unexpected’ as the recent rainy spell had broken the record of 20 to 30 years. He said the government should be assisted in such efforts which were more important than holding sit-ins. -dawn

American Actress Joan Rivers Has Passed Away At 81 Years Old.