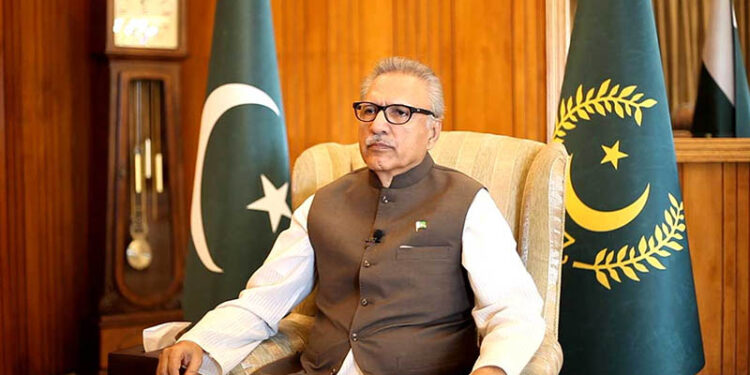 ISLAMABAD, Sep 8: President Dr Arif Alvi on Thursday said that dialogue among the political forces was essential to address the pervading crises and reduce confrontation, expressing the hope for a positive development in this regard.

The president, in an interview with a private television channel (Geo News), said he had always been a “good proponent” of dialogue among the political forces and had been keeping contacts behind the scene with an aim to reduce the confrontation.

“I will not make any prediction. I can say I am hopeful. Allah will bring the positive efforts to fruition,” he told Hamid Mir, the host of Capital Talk.

Regarding the controversy on holding early elections, the president said the issue should be resolved by evolving a consensus among the political forces.

Discussing the pervading challenge of floods, the president said all the institutions, including the National Disaster Management Authority and provincial disaster management authorities had been playing a positive role for rescue and relief of the flood-stricken people.

He said the national economy was under stress caused by the COVID-19, floods, change of government and Ukraine war affecting the sustainability in the country.

To a question about the appointment of next army chief, the president said the matter should be resolved through a “constructive conversation”.

Asked about the relationship with Prime Minister Shehbaz Sharif, he said he had good relations as both had unanimity of views on most of the legislative matters.

He said he had refused to assent the bills on overseas voting, electronic voting machine and the National Accountability Bureau as instead of addressing the shortcomings, one should not abolish the whole institution.

The president said he was glad over the success of IMF (International Monetary Fund) deal as it would pave a way for funding from other international financial institutions and friendly countries.

He said the consistency of the policies was essential for the economic stability.

Asked whether he favoured the presidential or parliamentary system, the president said the elected individuals were more important than the system as there had been the examples of bad or good prime ministers or presidents.

President Alvi also called for making public the findings of the investigation, if any, into Imran Khan’s allegations of foreign interference, which he also emphasized through a letter to the prime minister.

About the foreign funding case, he said while being the secretary general of the Pakistan Tehreek-e-Insaf, he introduced the mechanism to document the funding received from the supporters.