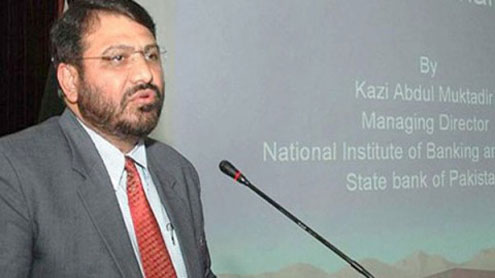 “The new plan will set the strategic direction for the Islamic banking industry. This would define the strategies and action plans to move the industry to the next level of growth and SBP would expect active and meaningful involvement of the industry in development of the plan,” Muktadir said while addressing the Islamic Finance News (IFN) Roadshow–2012 held here at the SBP’s Learning Resource Centre (LRC).

He said the Islamic finance industry is likely to increase its share in the banking system to 15 percent during next five years. Growing from scratch in 2002, he said that Islamic banking now constitutes over 8 percent of the country’s banking system with a network of 964 branches and over 500 windows across the country. ‘Encouragingly, the sustained growth of Islamic banking in the country during the last decade has also started catalyzing growth and development of Islamic capital markets, Mutual funds and Takaful companies etc.

Presently, we have 5 Takaful operators, about 30 Islamic mutual funds,’ he added.Muktadir disclosed that the State Bank was also developing a comprehensive Shariah Governance framework to further strengthen the Shariah governance in Islamic Banking Institutions (IBIs) and added that the framework will explicitly define the roles and responsibilities of different organs of IBIs including the Board of Directors, Shariah Advisors/Committees and Executive Management for ensuring Shariah compliance. He said the SBP had developed a comprehensive profit distribution and pool management framework in consultation with the industry and added that the framework will be issued most probably within this month.

Muktadir said sovereign Sukuk of Rs.369 billion ($ 4 billion approx) were issued during last two years that have largely addressed the liquidity management issue of the Islamic banking industry. ‘The regular issuance of the Sukuk, almost on quarterly basis, has improved market confidence and tradability of the Sukuk,’ he added.He said the central ban had been taking initiatives to strengthen the legal, regulatory and Shariah compliance framework, create awareness amongst the masses and build the Islamic banking industry’s Human Resource capacity.

Muktadir said SBP would soon be launching a mass media campaign to create awareness about Islamic banking. “The campaign we believe will be instrumental in enhancing public awareness and would give further boost to the growth momentum of Islamic banking industry,” he added.The implementation of three-year bilateral Currency Swap Arrangement (CSA) between the State Bank of Pakistan (SBP) and the Central Bank of Republic of Turkey (CBRT) amounting to $ 1 billion in equivalent local currencies began yesterday.To this effect, the SBP has issued necessary instructions to the banks for its implementation after due consultations with various stakeholders and completion of operational formalities with CBRT.

A bilateral CSA was signed between SBP and CBRT by SBP Governor Yaseen Anwar and CBRT Governor Erdem Baþçý in the presence of presidents of the two countries in November last year.The objective of the currency swap is to promote bilateral trade between the two countries in the respective local currencies and any ‘other’ purpose as mutually agreed between the two central banks.Since the CSA is a bilateral financial transaction, all terms and conditions apply equally to both countries and the pricing is based on standard market benchmarks which are widely acceptable in the respective domestic markets. The CSA between the two central banks would give a positive signal to the market on the availability of liquidity of other country’s currency in the onshore market.

The arrangement would augment the pool of liquidity available to finance bilateral trade between the two countries, supplementing the already available sources of liquidity.By virtue of this arrangement, SBP would have the ability to draw on the swap line and provide Turkish Lira (TRY) to banks in Pakistan. The banks would on-lend this liquidity to importers/exporters involved in trade denominated in TRY. At maturity, the importer/exporter would repay the foreign currency to the lending bank which in turn would repay to the respective central bank. In order to ensure transparency in determination of market interest rates, the SBP has decided to conduct competitive auctions of TRY Loan Facility as under:

All commercial banks would be allowed to take FE-25 deposits and extend FE-25 loans in TRY for financing of imports/exports in accordance with the SBP’s prevailing instructions on FE-25 loans/deposits. Necessary instructions to that effect have been issued vide FE Circular No. 4 on Tuesday.To provide TRY funding to scheduled banks so that they can on-lend the TRY to traders with underlying trade documents in TRY, SBP would conduct competitive auctions of TRY Loan Facility using proceeds drawn under the CSA with CBRT.

Participation in auctions would be dependent on the submission of documentary evidence of export or import bills denominated in TRY, SBP would conduct ‘uniform price’ competitive TRY auctions in three and six month tenors. All scheduled banks would be eligible to participate in such auctions.Further details on the utilization of TRY in Pakistan on account of PKR/TRY swap are as follows:

b) Exporters with underlying trade documents denominated in TRY: Once the contract is established, the exporter would borrow in TRY, sell TRY against PKR and utilize PKR for its local operations. On the maturity date of the contract, the exporter would receive TRY from the overseas buyer and payoff the TRY loan locally. All banks are expected to educate their customers on the additional option of denominating their Trade documents in TRY. SBP would encourage banks to hold sessions with local trade bodies. – PT