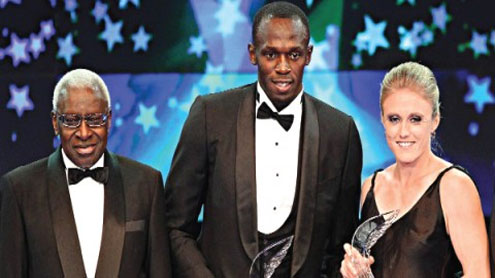 With an eye toward showdowns at the London Olympics, the Americans swept all six “USA Versus the World” events, although Jamaican men’s superstars Usain Bolt, Yohan Blake and Asafa Powell were not at the meet. The US men’s 4×400 relay, anchored by reigning Olympic 400m champion Lashawn Merritt, also set a 2012 world best by winning the two-heat final in 3:00.15 and the US 4×400 women won in 3:21.18 to beat Jamaica by 5.37 seconds.”If today is a preview of what we’re going to see in the Olympic Games, we’re in great shape,” said Max Siegel, who becomes USA Track and Field’s new chief executive on Tuesday.

In cool conditions with a slight breeze, the American women’s foursome of Tianna Madison, Allyson Felix, Bianca Knight and Jeter won in 42.19 seconds, this year’s world-fastest time. “The US is definitely ready for London,” Jeter said. “We’re prepared. Now all we have to do is stay healthy.”Jamaica was a distant second in 43.31 with a lineup that featured Sherone Simpson, Kerron Stewart and anchor Shelly-Ann Fraser-Pryce, the 2008 Olympic 100 chmpion, from last year’s world runners-up plus Aleen Bailey as third leg. Felix pulled away in the second leg and Knight handed Jeter a huge edge and watched the world champion pull away from Fraser-Pryce to the finish line.

“We wanted to come out and run a great race,” Jeter said. “We have great chemistry. We had great handoffs. I’m glad we got it around.” In the men’s 4×100, American Mike Rodgers and Jamaica’s Nesta Carter were even after the first leg but US star Justin Gatlin, the 2004 Olympic and 2005 world 100 champion who was disgraced by a four-year doping ban in 2006, pulled away in the second leg, Darvis Patton kept the edge and Dix stretched the gap even more at the finish to win in 38.40.

“This is definitely what they may see in London,” Dix said. “I can’t wait to get there.” A second US squad with Ivory Williams, Shawn Crawford, Trell Kimmons and Ryan Bailey was second in 38.47 with Jamaica third in 38.98.Merritt, who served a 21-month doping ban after winning the world 400 crown in 2009, anchored the US 4×400 relay victory at last year’s world championships in South Korea and did the same at Franklin Field at the 118th Penn meet. – PT

Pakistan to take full tour of Sri Lanka from May 29