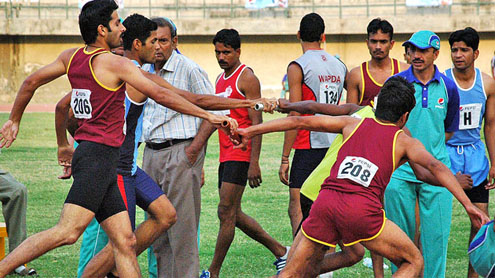 Addressing a press conference on Wednesday, Athletics Federation of Pakistan (AFP) president Major General (r) Mohammad Akram Sahi said that more than 500 athletes from 18 departments would take part in the national championship. “Pakistan Army are the defending champions and cash awards will distributed among top players,” he added.

The event was earlier scheduled to take place in Karachi but the AFP shifted it to Islamabad mainly because the athletics track in Karachi was not in good condition. Sahi said the AFP’s efforts for uplifting athletics in the country were yielding positive results and that was evident from the performance of athletes in the recent past. He said two Pakistan athletes Liaquat Ali and Rabia Ashiq would take part in the London Olympics on wild cards. – Dailytimes