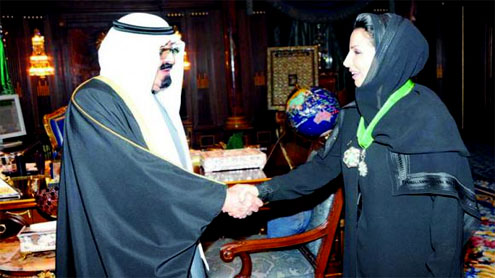 Saudi women have taken remarkable steps toward successful achievements thanks to King Abdullah’s full support in various areas.On the occasion of the seventh anniversary of King Abdullah’s accession to throne, Saudi activist for children and women’s rights and member of the National Society of Human’s Rights’ executive board, Suhaila Zain Al-Abideen, said: Following the king’s decision in September 2011 to allow women to become members of the Shoura Council as well as vote and contest the municipal councils, Saudi women have been given a powerful political right.

“Political participation is one of the most significant rights that Saudi women have gained from our beloved king. Saudi women are more successful than ever because our king believed in us and gave us our rights,” she said. “Saudi women have proven they are qualified to hold leading positions and becoming fully involved in both Shoura and municipal councils helps them gain their social, political and civil rights,” she added.“Saudi women are now lawyers, engineers, scientists and successful businesswoman and we are asking for more. Now that women do not need permission from their male guardians to apply for a job or start a business, we also ask that we be given other benefits that do not need the authorization of our male guardians like going on a scholarship for female students and going to the Saudi courts, where women need to accompanied by male guardians,” said Al-Abideen.

Naila Attar, businesswoman and founder of the Baladi (My Town) initiative calling for women to be able to vote and participate in the municipal council elections, said all Saudi men should follow their king and make him their role model when it comes to wise leadership and empowering women.“We are living now in the golden age for Saudi women because we are witnessing a huge number of successes among us that has never seen before in the Kingdom,” she said.“We are looking to be part of the political process in the municipal council and our initiative is to help those women gain experience and education to be decision makers. We have sent a report to the minister of municipal affairs demanding to start a female voluntary committee in municipal councils around the Kingdom to make sure women get the proper awareness, rehabilitation and training,” she added.

Columnist at Al-Watan newspaper and professor of linguistics at King Abdulaziz University’s girls’ college Amira Kashgari said she believes King Abdullah empowered Saudi women in so many different areas.“This is notably the case in the political arena and there are so many other areas where women have been empowered in the Kingdom in the last seven years intellectually, socially, economically and politically,” she said.“This political empowerment has transformed women’s ideas of themselves and the social balance in Saudi Arabia. To be part of the Shoura Council and to be able to vote and contest for the municipality councils is a major milestone in Saudi women’s lives because it will not only empower women but society as well,” she added.“When you empower women, you empower the whole society because it reflects on the economic development of the Kingdom. Women’s participation is a must in all areas,” said Kashgari. – Arabnews