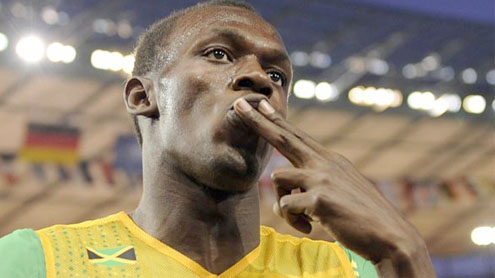 LONDON: Reigning Olympic champion Usain Bolt has said that he is looking for another breathtaking performance at the London Games, aiming to go as fast as possible for the 100 and 200 metres.

“People are looking forward to me running 9.4, 19 seconds, anything that’s amazing,” the 25-year-old Jamaican told the BBC in an interview to mark the 100-day countdown to the start of the Games in the British capital on Wednesday. “So, I’m working as hard as possible so I can go as fast as possible.” Bolt was one of the main stars of the last Games in Beijing four years ago, winning gold in the 100m, 200m and 4x100m relay, establishing him as one of the greatest sprinters of all time.

The sprinter clocked world records of 9.69secs and 19.30secs in the 100m and 200m, while the Jamaican team’s 37.10secs in the 4x100m was also a new world best. Bolt cemented his position in the sporting pantheon by lowering his own world records to 9.58secs for the 100m and 19.19secs for the 200m at the 2009 World Championships in Berlin. Bolt made a triumphant start to his 2012 season last Saturday, anchoring his Racers team to 4x100m relay victory in the UTech Classic in Kingston, Jamaica. – Dailytimes