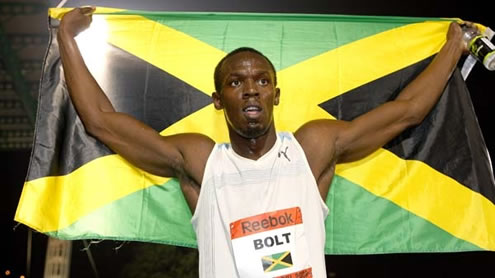 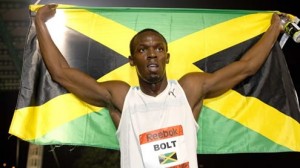 DAEGU, South Korea (AP) — Still fuming from his false start that knocked him from the 100-meter final, Usain Bolt crouched slightly on the line and waited. Then he zipped into the darkness of a deserted practice track.There, only a short hike from the main stadium, he didn’t have to worry about jumping the gun.Bolt missed out on defending his title Sunday when he jumped from the blocks early at the world championships. He was disqualified by a highly debated zero-tolerance false start rule enacted last year.”He’s human, isn’t he? I always knew he was human,” said his coach, Glen Mills. “He will pick himself up. He’s a champion.”Just not on this night.Bolt knew instantly it was his error, too. Soon after the gun went off, soon after taking just a few steps out of the blocks, another gun blasted — the knot-in-your-stomach sound for any sprinter.

Bolt’s eyes grew big. He pulled his shirt over his face, then ripped it off and whipped it around in his hand. Grudgingly, Bolt left the stage he has dominated since the 2008 Beijing Olympics.Instead, it was left to another Jamaican to wrap himself in the country’s flag — Yohan Blake, a 21-year-old up-and-comer that former Olympic gold medalist Maurice Greene predicted to win.Blake finished in a modest time of 9.92 seconds, 0.16 seconds ahead of American rival Walter Dix. Kim Collins of Saint Kitts and Nevis, the 2003 world champion and now an aging 35-year-old veteran, was third.On the morning after his disqualification, Bolt realized Monday he had to move forward as quickly as possible.”There is no point to dwell on the past. I have a few days to refocus and get ready for the 200 on Friday,” the Jamaican said in a statement.The 200 is his favorite event and more gold could be waiting in the 4×100 relays on Sunday, the last day of the championships.

“I know that I am now in good shape and will focus on running well in the 200,” Bolt said.”Definitely, I wasn’t focusing on beating Usain,” Blake said. “I was just focusing on finishing in the top three.”This was also a day that Oscar Pistorius, the double-amputee sprinter known as the “Blade Runner,” showed he indeed belongs on the same track with able-bodied athletes at big meets. Springing along on his carbon-fiber blades, Pistorius advanced to the semifinals of the 400.”A big sense of relief,” he said.On the track, it was a big show for the Americans. Defending champion Trey Hardee and Ashton Eaton gave the U.S. its first 1-2 decathlon finish at the worlds. Brittney Reese defended her long jump title, and Allyson Felix breezed into the finals of the 400 with an easy win in her heat.

This entire competition was setting up as a stroll for Bolt. Jamaican teammate Asafa Powell withdrew just before the event began because of a groin injury, and American rival Tyson Gay was out with a hip injury. As if to underscore how easy this might be, Bolt cruised through his previous two rounds.Then he false started. It wasn’t even close. He’s 6-foot-5 and it’s clear when he stands up in the blocks too soon.His night done, Bolt gathered his stuff, slung his backpack over his shoulder and headed down the tunnel that leads out of the stadium. He wouldn’t talk, glaring at anyone who got too close or tried to ask any sort of question as he walked up a path. He went through a fenced gate that leads to the warmup track, typically off limits to all but the competitors.Once there, he joined a group of friends and coaches, throwing down his backpack, taking a swig of water, dumping some on his head and tossing the bottle aside. He sat down briefly before jumping up and heading onto the track.

Bolt lined up in Lane 6 — one spot from his lane assignment in the final — waited a second to compose his thoughts and took off down the runway with just a few eyes watching him. He traveled about 100 meters, turned around, jogged back and went again.Four times he repeated that. Four times he paused at the starting line.He was getting back on the horse again.
After his cool-down, some encouraging words from the Jamaican contingent and a quick massage, Bolt trudged across a grass field to catch a ride. Before he could reach the safety of his car, though, he was met by a few reporters.”Looking for tears? Not going to happen,” said Bolt, his agitation beginning to subside. “I’m OK.”Enough to run the 200 meters?”You’ll see on Friday,” he said, referring to the start date of the race.Change the false-start rule?Silence. And then the car ushered him away.”I didn’t really think they were going to kick him out,” Dix said. “How can you kick Usain out of the race?”

This is typically Bolt’s stage, but the world-record holder had a little company Sunday in Pistorius and Hardee. Other winners were Ibrahim Jeilan of Ethiopia (10,000), Valeriy Borchin of Russia (20-kilometer walk) and Li Yanfeng of China (discus).Still, Bolt found a way to steal the spotlight from Pistorius and everyone else. This 100 will be known not so much for Blake’s crowning achievement but the one in which Bolt jumped the gun.”I didn’t expect that from him,” Blake said. “I had to just keep my head, keep the focus and get the job done for Jamaica.”Leading to the worlds, Dix, a two-time Olympic bronze medalist, said he was in the kind of shape to possibly upset Bolt. Only he didn’t count on Blake, or being so hesitant following the ousting of Bolt.

“You kind of wanted to sit in the blocks and not move,” Dix said. “I definitely thought I could have been more competitive than running from the back. It was great to put the U.S. back on the medal stand.”As did Hardee and Reese, who defended their world titles, along with Eaton, who used a fast 1,500 in the final event of the decathlon to move into second place.A smooth-running Felix had no trouble moving on to the final of the 400, while teammate and defending champion Sanya Richards-Ross had all sorts of anxiety.Richards-Ross fought back tears as she watched the final heat of the semifinals. She had a tenuous grip on the last ticket to the final after a shaky performance. Only when her spot was secure did Richards-Ross deeply exhale.”That was more than close,” she said. “Got to shake it off.”Felix is chasing a double in Daegu in the 200 and 400. She has been trying to conserve energy and not push the pace. Yet even when she’s trying to hold back she’s difficult to beat.Bolt used to be impossible to beat at major championships. But that was before he jumped the gun. – news.yahoo