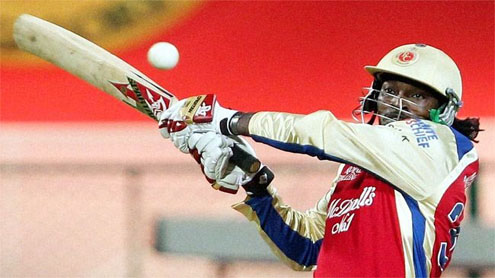 NEW DELHI: West Indies batsman Chris Gayle Wednesday visited a girl in hospital who suffered a broken nose after being hit by one of his sixes as she watched from the stands at an Indian Premier League (IPL) match on Tuesday night.

The Royal Challengers Bangalore (RCB) opener smashed eight sixes, including five in a row off leg-spinner Rahul Sharma, during an explosive innings that helped his team beat the Pune Warriors on Tuesday evening. Gayle said on Twitter that after learning one of his strikes had hit the young fan, named only as Tia, he decided to go and visit her at a hospital in Bangalore. “Her 1st word to me is to Chill, She’s fine!” he wrote. The left-handed opener, who was named man of the match, cracked a 48-ball 81 in a magnificent display of power-hitting to help Bangalore surpass Pune’s challenging total of 182 with six wickets to spare in a last-ball finish.

“She was thrilled to meet Gayle, who also presented his medal (for hitting maximum sixes in the match) to her,” RCB manager Avinash Vaidya told AFP, saying the girl was thought to be aged about 10. Gayle has not played for his national side since last year’s World Cup and has been involved in a long-running dispute with the West Indies cricket board. – Dailytimes