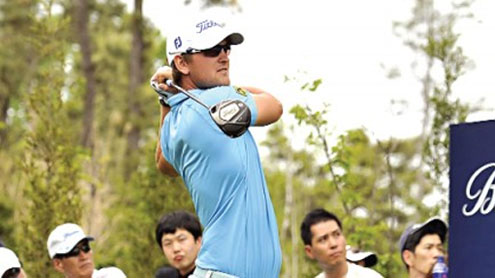 SEOUL: Bernd Wiesberger, ranked 170 in the world, showed a cool head to score his maiden victory on the European Tour as he ran away with the $2.9 million Ballantine’s Championship on Sunday.

The 26-year-old from Austria, competing in his 71st event on the Tour, never looked back after firing consecutive 65s on Friday and Saturday on the 7,302-yard, par 72 layout at Blackstone Golf Club, Icheon, South Korea. His four-under 68 on Sunday was his third consecutive bogey-free round and he maintained his overnight five-stroke advantage with little fluster to hold off a charge from Scotland’s Richie Ramsay, who carded a superb closing round of seven-under 65 to get to 13-under-par. When Ramsay birdied the 16th he had pulled to within three of Wiesberger, but the Austrian, cheered on by his Belgian coach Philipp de Busschere, who flew in from Jakarta overnight, simply rolled in a birdie of his own at the 15th to re-establish a four-shot margin.

“I can’t say I wasn’t nervous on the first tee box,” said the Austrian, who was a runner-up twice on the European Tour in 2011 but had never led going into the final round of an event. “But when I got the first shot out there on the fairway it was a bit of a relief.” Wiesberger didn’t really feel the tournament was in the bag until he stood on the 18th green with, as he put it, “a million putts to win”.”I know that things can happen and that things have happened. But I talked with my caddie and he said just try to play our game. Try to be aggressive and make birdies because these guys are going to come after us and they are not going to back down,” Wiesberger added.

“So I was only sure when my ball was on the green at 18 and I had a million putts to win the tournament. That was when I kind of realised what had happened.” His superb performance meant that he had played 59 consecutive holes without a bogey since the 13th hole on Thursday.Starting the week at number 170 in the world, he looks set now to move into the top 100 when the new rankings are announced on Monday after picking up the largest cheque of his career, $470,000. He becomes only the third Austrian to win on the European Tour after Markus Brier and Martin Wiegele. It was a remarkable feat for such an inexperienced player when Tour greats such as Adam Scott, Ian Poulter, Paul Casey and Y.E. Yang all failed to threaten the top of the leaderboard.

British Open champion Darren Clarke didn’t even make it to the weekend after rounds of 77 and 72.”To play the way I did this week is very special,” Wiesberger said. It was fun out there. Amazing. My first time in Korea and a great week.” Ramsay was the only player in the chasing pack to get anywhere near the Austrian.”It was a fantastic day. I’m very happy with second place,” the Scot said.Spanish veteran and Ryder Cup player Miguel Angel Jimenez, runner-up here last year to Lee Westwood, played immaculately from tee to green all week but could not find the killer touch on the greens which would have enabled him to shoot a low round and close on the leader. Jimenez carded a final round of three under par 69 to finish tied for fifth at 10-under-par for the week.But he left a disappointed man after finishing with an expensive bogey six at the 18th which denied him a share of third place and cost him around $36,000 in prize money after being disturbed by someone in the crowd. – PT