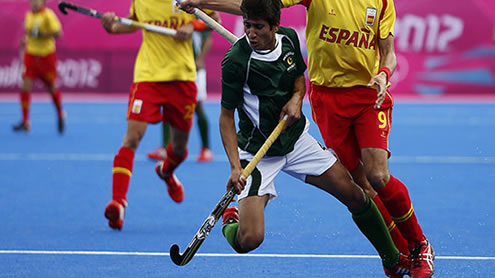 LONDON – In an opening encounter full of drama, Pakistan perhaps surprised even themselves by holding Spain to a 1-1 draw in what could have been a much satisfying clear win had the rub of the green gone their way.

That said, it was a result that satisfied none of the two sides for had it been their day, each could have walked away with full points. In the other earlier pool A fixture of the day, the Aussies had no such issues. In keeping with its No 1 status in the FIH ranking, the Aussies showcased frightening display of firepower to overwhelm South Africa by 6-0 – three of the strikes coming off skipper Jamie Dwyer’s stick. For Pakistan, this is not quite well begun – unless one considers avoiding a hammering a blessing.

Having a better-endowed Spain under the cosh decidedly for long stretches, creating scoring opportunities on the short corner and in the field, and even making pretty decent attempts the win still eluded Pakistan as Francisco Cortes, the Spaniard ‘keeper, was unflinching under the bar. Much as they may rue losing a point, the fact is that given their record in the lead up to the Games had this result been on offer before the match, Pakistan may indeed have taken it.

The match, as Spanish coach in his post-match comments conceded, was played in phases, with both teams having some nervy moments. After intense opening sallies, Spain diminished as Pakistan’s entire 16 – with the management craftily swapping them constantly – showed some dogged determination in the middle to see out the onslaught and then initiated their own moves. Whether Spain didn’t expect this sustained counter-attack or not, for the first time Pakistan started moving up with facility and fluency. To their dismay, forward Muhammad Rizwan faltered twice from close quarters.

Two short corners were obtained, skipper Sohail Abbas on both going aerial. On any other day, his high and mighty flicks would have unerringly found the back of the net. But on Monday, first to his left and then right, Cortes stretched his elbow and timed the jump to perfection – knocking the first on to the bar and out of the harm’s way, slapping the next out of the circle. On yet another attempt, Haseem’s not too powerful a shot found Cortes put his midriff in between and Spain continued to live a charmed life.

Not so bad after an edgy and tentative start when the Spaniards tried to boss them, Pakistan shaking off its loser’s mien to find rhythm and fluency in attack with the defenders too finding their feet was pleasing to the eye. The management rang changes thick and fast but Pakistan’s ascendancy in the middle remained unaffected. Advantage on the balance distinctly with Pakistan, the first half remained goalless. Pakistan stepped in on the field in the second part with purpose, and after a splendid little run at some pace and dribbling from around the middle, Haseem Khan selflessly passed one to Rehan on the right of the goal. This time round a lonely Cortes had no defence for the rasping drive.

For the Greenshirts, the joy of getting their noses ahead was short-lived. They had not even ended celebrating when on a counter-attack Pau Quemada reverse-hit the ball into the board. After none in the first 44 minutes, two strikes in two minutes but things were again at par. Only moments later on a short corner rebound, Spain got their second, but Pakistan opted for a review for a swinging stick foul that was upheld. The parity was to sustain to the end.

There is no denying that Pakistan was the better side on the day, showing improvement in all areas and playing well as a unit – though the performance of two key seniors Shakeel Abbasi and Waseem Ahmed was not really up to the scratch. This needs to be sustained when they meet Argentina Wednesday. The task is steep and room for error is non-existent. -Pakistantoday

Not Quite so Lucky After All ….