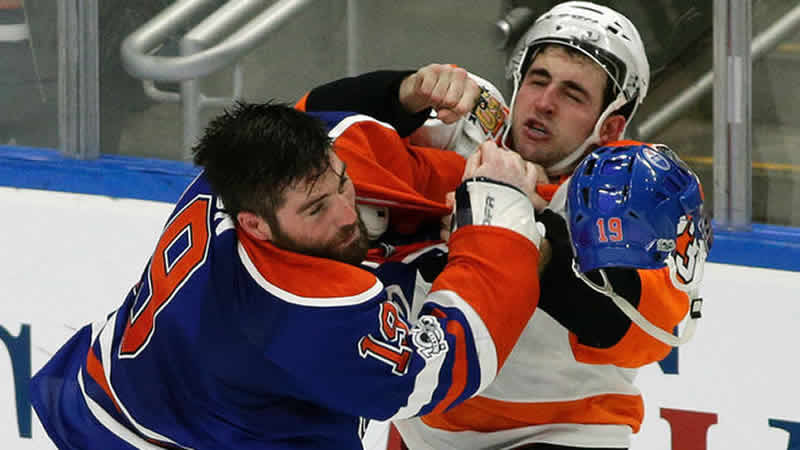 It’s too bad the Edmonton Oilers have to go out on the road for six after what we watched last night at Rogers Place.

A lot of messages were delivered in a 6-3 win over the Philadelphia Flyers. There was the one Patrick Maroon delivered to the face Brandon Manning with hockey’s best jab and a variety of rights.

That message was also delivered by Maroon to the rest of the NHL, re: Messing with Connor McDavid. It seemed there was a line-up of Oilers who wanted a piece of the Flyers defenceman who cost McDavid half a season last year, either by accident or otherwise, but decided to chirp McDavid about it on the Oilers’ visit to Philadelphia earlier this season. There were other messages delivered and received this night. There was the one on the scoreboard, where the Oilers have scored 11 goals in the last five periods after going five games getting only four goals. But the most significant message of all, it says here, was in the standings, where the Oilers reached the 70-point plateau. Last year, Edmonton finished the season with 70. The Oilers have survived both the All-Star Break skid, the CBA-mandated five-day-off skid and, just for good measure, a bonus day off Wednesday while the Oil Kings were playing a Hockey Hooky game during their normal practice slot. They’re now back on track to end up with 100.701 points in the final standings. The last time the Oilers recorded a 100-point season was 1986-87.

The Oilers are tied with the Anaheim Ducks for second place in the Pacific Division. Repeat. Tied with Anaheim. Same number of games played. Same number of points. One more win. An Anaheim-Edmonton playoff match-up is looking more and more like an automatic. Over the last two dozen games, the fans should start getting dialed into a race for second place and wrap their heads round the concept of opening the playoffs at home. With the result Thursday night, maybe now everybody has climbed down from the ledge again? Or should the sentries stay on alert through the coming six-game road trip just to make certain the sky is still not falling? Hey, it was only a game ago that head coach Todd McLellan had to convince his players of the same thing. Instead of peeling paint off the dressing room walls after a pathetic first period, McLellan decided to convince them that they were at top-10 team. When McLellan removed the booster cables and sent them out on the ice for the second period, the Oilers used the vote of confidence to look like they did in those last three games on the road before the All-Star Break.

Thursday night, they showed up looking like that top-10 team from the git go. Hey, there’s still plenty of room for the analytical, critical purveyors of puck to do their thing. General manager Peter Chiarelli basically told everybody he’s going to stick with this team that put up the 70 points so far this season to find out who will play prime time hockey and who won’t. Remember the battle cry for most of the last decade: Play Meaningful Games In March? Well, here we are. And Thursday night’s game was an interesting study on that front, as well. There are players here, a lot of them, who have never played a Stanley Cup playoff game or a meaningful game in March:

Jordan Eberle, Ryan Nugent-Hopkins, Oscar Klefbom, Darnell Nurse, Matt Benning, Drake Caggulia, Jujhar Khaira, Iiro Pakarinen, Tyler Pitlick, Anton Lander, Anton Slepychev, Brandon Davidson, Jordan Oesterle. Even goaltender Cam Talbot has never started a playoff game (although he finished up a couple). McDavid and Leon Draisaitl, of course, haven’t played any either. But there are no question marks there. Adam Larsson has only played five. Andrej Sekera has played 623 NHL games but only eight playoff games. Eric Gryba has played 10. Mark Letestu has played 454 NHL games and only played 17 in the playoffs. Are these guys going to embrace the games at this time of year, or disappear? For those of you scoring, Eberle and Nugent-Hopkins in particular, looked like prime time players Thursday night. That will be an interesting scorecard by the end of the season.