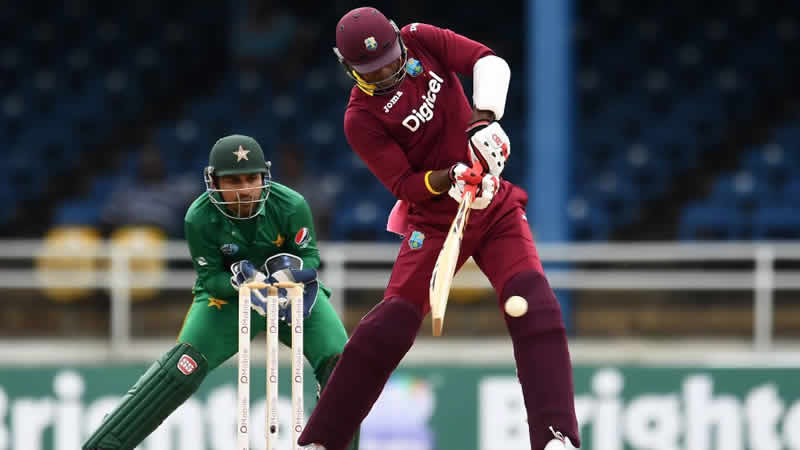 Shadab Khan gave another match-winning bowling performance and Hasan Ali held his nerve for Pakistan to sneak a three-run victory over the West Indies in the second T20 International on Thursday.

Set a relatively modest target of 133 to level the series following a six-wicket defeat in the opening match in Barbados, the hosts were restricted to 129 for eight to suffer their fifth consecutive T20 loss to the visitors.

Pakistan now hold an unbeatable 2-0 lead ahead of the final two matches at the weekend back at the Queen’s Park Oval in Trinidad. In the wake of an impressive senior international debut at Kensington Oval, Shadab snared four for 14 with his mesmerising mixture of leg-breaks and googlies to stymie the West Indies quest. His most important strike came on the last delivery of his four-over allotment when he had Marlon Samuels caught at the wicket for a top score of 44. Samuels’ imperious strokeplay, reminiscent of his two match-winning performances in World T20 finals, looked to be taking the home side to the target before he was undone by the confident 19-year-old. Getting Samuels was important for us to have a chance of winning,” said Shadab after collecting his second straight Man of the Match award.

This pitch had more bounce and encouragement than in Barbados so I am really looking forward to the final two matches.” From that point the balance was tilting in favour of Pakistan although West Indies captain Carlos Brathwaite, who had earlier taken three wickets on a sultry afternoon, battled to keep his team on course in partnership with fellow all-rounder Jason Holder. But it came down to fast-medium bowler Ali retaining his focus and concentration in the final over after being smashed for boundaries by Sunil Narine off the first two deliveries. West Indies needed just six more runs to complete the victory but the bowler’s excellent accuracy denied both Narine and Holder, who could only manage a single off the last ball when a boundary was needed to tie the scores and force a super over.

Put in to bat after Brathwaite won the toss, Pakistan struggled to gain any sort of batting momentum against the twin spin threat of Narine and Samuel Badree. Narine claimed three for 22 and Badree two for 14. Pakistan were indebted to the ninth-wicket pair of Wahab Riaz and Shadab as they put on 36 quickfire runs off the final four overs to bring a measure of respectability to the total after they were put in to bat on a dry, turgid surface. They were in trouble from the very first over when Kamran Akmal was bowled by Badree without a run on the board. From that point on they laboured despite a 41-run stand for the second wicket between Babar Azam and opening batsman Ahmed Shehzad. Azam got to 27 before falling to Brathwaite while Shoaib Malik followed up his match-winning unbeaten 38 at Kensington Oval with a top score of 28.

He was the second victim of the home skipper, triggering a slide which left Pakistan at 95 for eight in the 17th over and in danger of failing to bat through the full 20 overs. “This was a match we should have won,” said an obviously disappointed Brathwaite. It’s easy to second-guess a lot of things in the course of play but we were in control for long periods in the field and with the bat – but just didn’t finish off the job.” However Riaz and Shadab batted with determination and haste as 45 runs were taken off the last five overs to give themselves a fighting chance.