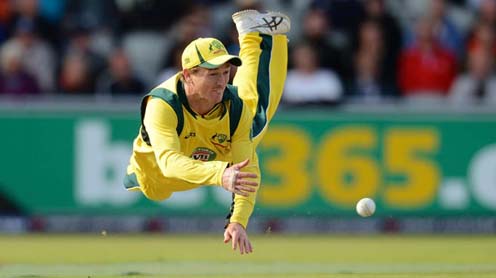 PERTH: Stand-in Australian captain George Bailey Thursday shrugged off injury fears and declared himself fit to lead the new world number one side in the fourth one-day international against England.

Bailey had been suffering from a hip flexor injury but said he would definitely take over at the match in western Australia on Friday in the absence of rested skipper Michael Clarke. “I’m 100 percent good to go,” Bailey said. Australia lead 3-0 in the five-match series and surged to the top of the ODI rankings, overtaking India who lost to New Zealand, on Wednesday.

Australia are resting stars Clarke, Brad Haddin, Shane Watson and David Warner, giving England hope of breaking their duck on the tour Down Under which has already seen the Ashes surrendered 5-0. “It probably is their best chance (of victory),” Bailey said. “But having said that, I reckon our team is still pretty good. “I’m not that fussed about what England think or how they’re going. “It’s been a hell of a summer and we won’t be coming in nonchalant or complacent about what’s ahead of us.”

Australian middle order batsman Steve Smith, who is back in the 50-over side, said he is playing for a 2015 World place. The 24-year-old has averaged just 21.1 over his 33 ODIs and is determined to improve on that. “The World Cup is obviously still a fair way away, but every opportunity you get, you’ve got to try and impress,” Smith said. England are in danger of matching their worst-ever losing run.

The current streak, which started during the final match of their home one-day series against Australia last year, stands at nine. If they lose in Perth on Friday, the 10 matches without a win would equal records they set in 1993 and 2001. And it might get worse. With three Twenty20s to follow the one-day series, England’s losing run might stretch to 14. “I think it would be nice,” Smith said of packing England off home without a win.