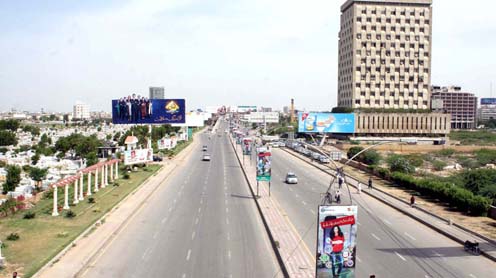 KARACHI: A strike was observed in Karachi after the call was made by the Ulema Action Committee over the law and order situation in the the city and by the Majlis-i-Wahdat-i-Muslimeen (MWM) to assert its demand for a military operation against terrorists, DawnNews reported.

An explosion was heard near Karachi’s Essa Nagri area. Police sources said the blast was caused by a hand-grenade which targeted a police van and injured a cop. The source added that the unknown persons hurled a grenade at the police mobile and that the grenade blast was preceded by aerial gun fire.

Moreover, the police source claimed that following the incident three suspicious persons were also taken into custody from the the vicinity. The Bomb Disposal Sqaud was called in after the incident.

The city bore a deserted look as vehicular traffic remained sparse on the roads. The Karachi Transport Ittehad had decided to keep public transport off the roads in support of the strike but later announced that public transport vehicles would return to the roads after Friday prayers.

Fearing security issues, all private schools in Karachi remain closed on Friday as a precaution, but the Sindh Education Department decided not to declare it an official holiday.

The Karachi University also announced postponement of all examinations scheduled for the day. A new date would be announced later.

He said Karachi was the jugular vein and largest city of Pakistan where for the last couple of years, Ulema, students, lawyers and doctors were being killed but their killers remained untraced.

Moreover, the MWM had observed a country-wide strike, and held sit-ins and demonstrations in Karachi, Lahore, Multan and Rawalpindi on Thursday over Tuesday’s killing of Shia pilgrims in a suicide bombing that took place in Balochistan’s restive Mastung district.

Many flights leaving the city were cancelled and many others were delayed owing to the city situation which did not allow the passengers and crew to reach the airport to get their flights.

Passengers of arriving and departing flights faced an uphill task in reaching their destinations because of the blockade of Sharea Faisal from Drigh Road to the Malir City traffic intersection as two of the 12 sit-in protests were being staged on the route of the key road at Malir 15 on the National Highway as well as at Natha Khan.

Legal work at the subordinate judiciary of the city also remained suspended as the jail authorities on Thursday did not bring the undertrial prisoners to courts, citing road closures.Hundreds of cases fixed at the city courts, district courts in Malir, anti-terrorism courts and other special courts for the day were not taken up for hearing.

However, the courts took up remand applications of the newly arrested, bail applications and other urgent matters for hearing.

Hundreds of Hazara men, women and children held protest sit-in in Quetta’s Shuhada chowk for about 48 hours in extremely cold weather with sub-zero temperatures at night.

According to an announcement made on Thursday night, after the Shia Hazara community agreed to end their protest sit-in following Federal Interior Minister Chaudhry Nisar Ali Khan’s assurance that strict action would be taken against elements who carried out the Mastung bomb attack, the funeral of the Mastung attack victims will be held today.