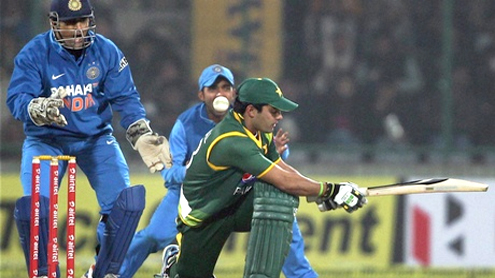 The Pakistan cricket team have made the nation proud of their some remarkable achievements. They have a lot of specialties the most well known being their characteristic of ‘ unpredictability’.

The advantage being that for their baffling aspect, the opponents cannot be sure of their victory. Even the spectators cannot forecast the result of a match till its end. Apart from this, the most novel acquisition of our team is something that brings disgrace to Pakistan cricket. It is the special trait of ‘ handing over the victory to opponents on a platter ‘. The most conspicuous example of this feat was the World Cup semifinal against India at Mohali, which we gifted to India perhaps as a goodwill gesture because our political high ups were present at the match to confirm their support for the slogan of ‘Aman ki Asha’. Our team was in such a great form that we perhaps lost the honour of winning the World Cup for a mere goodwill gesture. Skipper Misbah ul Haq played such a passive game that the cricket lovers plus the media awarded him the title of a ‘tuk tuk batsman’.

Although cricket lovers in the country have not forgotten the loss of such an important match, the nation somehow pardoned the team. One, however, fails to understand what type of a goodwill gesture was losing the third one-day international played at Delhi on January 6, 2013. This was the second shameful instance of presenting the victory to India on a silver platter. If it was a gesture of appeasement for the Government of India to send its team on a tour of Pakistan, we have failed to achieve the aim. They have refused to visit Pakistan for security reasons and suggested to convince Australia first to visit Pakistan under the prevailing conditions.

Discussing conduct of the match, the prolific battery of our young bowlers gave a splendid performance by shattering India’s strong batting line for a meager total of 167 runs in 43.4 overs. The magnificent haul of 5 wickets for 24 runs by the cricket world’s bowling ace Saeed Ajmal, which caused the collapse of Indian innings, opened the doors of a clean sweep for Pakistan. Unfortunately our batsmen destroyed the golden chance. Except for Nasir Jamshed (34), Misbah (39) and Umar Akmal (25) the remaining batsmen did not apply themselves correctly. With the satisfaction of having won the series they did not fight for a victory. Although the wickets kept falling constantly, the victory was written on the wall when the score was 125 for 6.

At this stage the batsmen needed to play the perfect game but they let go dot balls one after the other instead of scoring runs. Surprisingly, at one stage our team had 90 balls over and above the number of runs required for victory. Playing in the Tuk Tuk style the batsmen at the crease lost all the valuable overs at their disposal thus losing the match. They did not realize that achieving a clean-sweep would have been a more respectable triumph than a 2-1 victory. It is high time that the Pakistan Cricket Board (PCB) knows that the spirit of goodwill is meant to be shown off the field, in the stadiums, hotels, meetings and other functions and not by gifting matches on the platter.

The efforts of PCB chairman Zaka Ashraf for bringing international cricket back into Pakistan are appreciable but the refusal of the Indian team as well as Bangladesh team to visit our country clearly indicates that their cricket boards are not yet satisfied with internal conditions of Pakistan. Let us face the facts. Unless the terrorism is totally rooted out from our land no foreign team will dare visit Pakistan. – DailyTimes