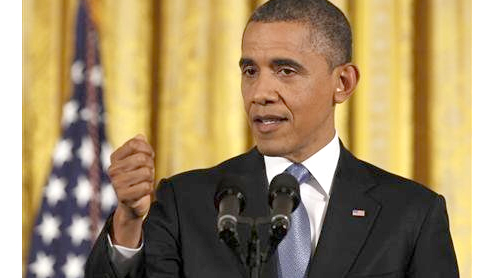 WASHINGTON: A “trophy wife” as first lady, a hapless college-aged son who burns down a fraternity house, and a daughter frantically taking pregnancy tests in a White House bathroom – this TV comedy had better be funny.

On Wednesday, President Barack Obama is slated to hold a private screening at the White House with the cast and crew of “1600 Penn,” an NBC series about a dysfunctional first family.The show, co-created by Jon Lovett, a former speechwriter for Obama, stars Bill Pullman as U.S. President Dale Gilchrist and Jenna Elfman as his first lady, and is named after the street address of the White House, 1600 Pennsylvania Avenue.

A preview of the show, which premieres on Thursday, features first son “Skip,” played by the show’s co-creator Josh Gad, being rescued by the Secret Service after starting a fire at his college fraternity house.”‘Meatball’ is in the oven,” an agent says into his lapel microphone, using the code name for the hapless Skip as he is hustled into a waiting black SUV.

But the show, which is apolitical, aims lower than other recent television dramas about the White House, like Aaron Sorkin’s drama series “The West Wing” or HBO’s dark satire “Veep.””We really wanted to dissect what it meant to be a family in the most extraordinary of circumstances – and what’s more extraordinary than being the first family?” Gad told reporters last month.So will Obama laugh? The screening in the White House’s family theater is “closed press,” meaning pool reporters won’t be there to document whether the comedy hits home. – YahooNews