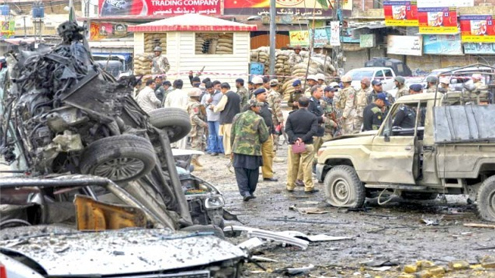 QUETTA: A string of bombings left at least 93 people dead and over 150 wounded in one of the bloodiest days of violence that Balochistan has seen for years.

“A suicide bomber detonated the explosives inside a crowded snooker club on Alamdar Road, a Shia-dominated neighbourhood of Quetta,” Home Secretary Akbar Hussain Durrani told Media.“Fifteen minutes later, another explosion went off outside the club as police, mediapersons and rescuers rushed to the site,” Durrani added.A senior police official said 81 people were killed and 121 injured – some of them critically. “The fatalities include a television journalist and cameraman, eight police officials and five Edhi volunteers,” Mir Zubair Mehmood, the capital city police officer (CCPO), told a news conference.

The two media men were identified as Samaa TV reporter Saifur Rehman Baloch and Imran Sheikh.Hamid Shakeel, the deputy inspector general of police (Investigation Branch), said the snooker club was situated in the basement of a four-storey building which collapsed with the impact of the blast.Moments before the blast, the home secretary said, a man was seen carrying a bag into the crowded snooker club. The man is suspected to be a suicide bomber.

As soon as mediapersons, police and rescue officials reached the site, the second blast went off. Television channels counted the two explosions as suicide attacks. But the home secretary later described the second as a time device that was planted in a car. Most of the casualties were caused by the second blast.The bombings disrupted power supplies and plunged the Alamdar Road neighbourhood into darkness. The area is dominated by the Hazara community, who are Shias by sect. Lashkar-e-Jhangvi claimed responsibility for the blast and said their target was the Hazara community.

A spokesperson for the militant group told Quetta-based journalists in a phone call that the first one was a suicide blast and the second was a planted bomb.The casualties were driven to the Civil Hospital where a state of emergency was already declared. Dozens of injured are in critical condition, medics said, adding that the death toll could rise.

“We have enough life-saving medicine to treat the injured,” Health Department official Dr Saleem told Media.After the Alamdar Road blast, there were two more blasts on Prince Road, which is part of the commercial district of Quetta, whipping up fear and panic among residents.Earlier in the day, a massive bomb went off near a paramilitary checkpoint at a busy roundabout of Quetta, killing around a dozen people, including a paramilitary soldier, and injuring 40 others.

The United Baloch Army (UBA), an insurgent group, claimed responsibility for the blast which took place in Bacha Khan Chowk, the commercial district of the provincial capital.“It was a time device,” Quetta police chief Mir Zubair said.  “The bomb was planted underneath a vehicle parked near a picket of the Frontier Corps (FC),” he told journalists as investigators sifted through the rubble for more clues. “FC personnel were the target,” said police investigator Hamid Shakeel.  The explosion destroyed at least 15 vehicles, three of them belonging to the FC, and 10 nearby shops. One of the FC vehicles was turned into a heap of mangled metal. An explosives expert said the bomb weighed 20 to 30 kilogrammes.

After the blast pools of blood, shattered windows, charred pieces of metal and merchandise from street vendors littered the roadside. Home Secretary Captain (Retd) Akbar Hussain Durrani confirmed 11 fatalities. “Among the dead were an FC soldier, a naib tehsildar and a Revenue Department official.” However, an Edhi rescue official added that one of the injured died while being driven to a hospital.“One FC personnel was killed and 10 were injured – two of them seriously,” said Murtaza Baig, the spokesperson for the paramilitary force.

Most of the casualties were shifted to the Civil Hospital where medics told Media that they have received 35 injured – some of them with critical wounds. Another 15 injured were shifted to other hospitals of the city.The UBA claimed responsibility for the blast in a phone call to Quetta-based journalists. The group’s spokesperson said the paramilitary force was the target. The UBA is one of many groups fighting a bloody insurgency in the province.The group had earlier kidnapped John Solecki, former chief of UNHCR in Balochistan, who was later set free.It was the deadliest day in Quetta since a suicide bomber blew himself up at a 2010 mourning procession, killing around 50 people. – TheExpressTribune