by top3
in Cricket
2 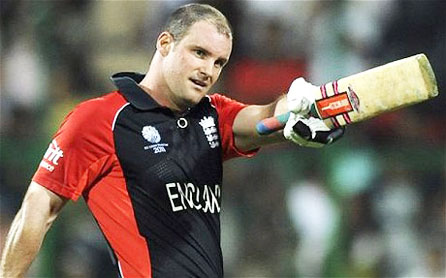 England’s wounded pride should be motivation enough to stop their losing streak against Pakistan.

But in case it is not, their desire to create a legacy in the manner of the West Indies team of the Eighties or the Australia side under Steve Waugh demands a return to winning ways.Between 1980 and 1994, the West Indies did not lose a single Test series, while that Australia team had a formidable record over a similar period with only India, away, as a blemish.

Andrew Strauss’s England team became the No1 Test team in August, but their first attempt at extending their reign has suffered an early setback in the United Arab Emirates after Pakistan took an unassailable 2-0 lead in the series. The final Test starts on Friday.“We don’t want to just be one-hit wonders, get there, have six months of lapping up everyone saying how good you are and then disappearing,” said James Anderson after nets on Wednesday.“We want to stay there as long as we possibly can and that’s why we need to win the next Test. We want to be in a really good position when South Africa come to England in the summer.”

Having reached the summit, England recalibrated their goals. But if one of them was to win all three series in subcontinental conditions this year (something they have already fallen short of), the other was to leave more than a paw print on cricket history.“When we became No1 we wanted to set new goals and we’ve chatted often about wanting to become the best England team there ever has been,” Anderson said. “We’ve not got off to a great start doing that but the beauty of this team is we have got strong characters in the dressing room, guys that can face up to the pressure we’re under at the minute.”

Strong characters are certainly handy when courage is required, as when facing the West Indies pace batteries of yore, but England’s batsmen have to find skilled solutions to Pakistan’s spinners, not just brave ones, especially if they are to make the kind of totals that win Test matches.One solution is to be more positive against the spinners, but that is by no means straightforward if the ball is turning, as it has done on the first day of both Tests.Although a slew of England’s batsmen, Strauss, Kevin Pietersen, Ian Bell and Eoin Morgan, look as if they might benefit from being more aggressive, such an approach does entail risk, and risk, especially the uncalculated type taken by desperate batsmen, often imperils a team further.

Another solution is to make a change, with Ravi Bopara or Steven Davies replacing Morgan, swapping someone whose confidence appears low with one untainted by the two defeats.Davies had a long net on Wednesday but watching Morgan bat in them was to be reminded of a Meerkat, such was his head bobbing while at the crease.The ideal always used to be to keep the eyes still and level but his sudden crouch, part of an exaggerated trigger movement just before the ball is bowled, means there is a vertical shift of at least five inches, which must surely impact on his judgment of length.

Given the series has already been lost, England might not make the change for strategic reasons. If they bring in Bopara now they are as good as committed to playing him in the two Tests in Sri Lanka in March and April as well, though with his bowling that might not be the worst idea should they want to persist with an attack comprising two seamers and two spinners in steamy Colombo.Playing Morgan, though, allows him the chance to redeem himself or, if he fails again, to defer their decision over which of the two plays in Sri Lanka until the warm-up matches there.In previous eras Pietersen and Bell would also be vulnerable to the chop.

This regime likes to back its players, though, and in any case there is the small matter of $175,000 (£120,000) for being the International Cricket Council’s top-ranked Test team on April 1, a prize in jeopardy only if England fail to win the final Test here and South Africa inflict a 3-0 whitewash over New Zealand, which is entirely feasible, next month.England’s bowling, which has been heroic for the most part, might also be subject to change. During the first Test in Dubai, England’s pace bowlers got as much from the pitch as Graeme Swann, though he has not been on top of his game for a while.

Three pace bowlers has been one of the pillars of success under Strauss, but that would mean dispensing with either Swann, or more unthinkably after his seven wickets in Abu Dhabi, Monty Panesar. Neither is likely to happen with England reprising the two-seamer. wo-spinner attack from the last Test, especially after Anderson admitted he had enjoyed the challenge.

Anderson, who has taken five wickets in the series, is one of several England players awaiting news of Saturday’s Indian Premier League auction. The others are Swann, Bell, Bopara, Matt Prior and the injured Chris Tremlett, with Pietersen, Stuart Broad and Morgan already spoken for.A potential source of envy within the dressing room, Anderson is adamant that it will not prove a distraction during the Test. “I think we’re professional enough not to talk about something like that during a Test match,” he said.Yet whether he and the others hit IPL pay dirt or not, it is time all the words stopped and the runs began to flow in their place. – Telegraph

SC to indict PM for contempt on Feb 13