Top 10 Most Dangerous Fish of the World 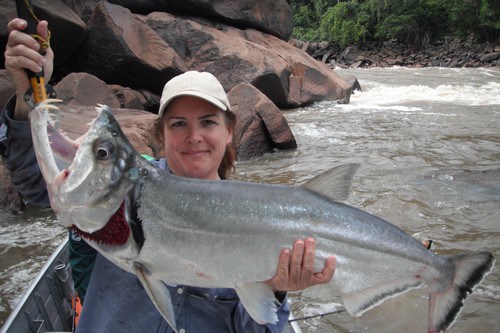 Fishes are among-st the most beautiful creations of nature and are most probably counted as one of the many species that are found freely in every environment. But apart from being beautiful, fishes tend to be quite dangerous too, let’s not forget the gigantic and dangerous structure of shark.

We all are fans of knowing about unusual things, knowing about the secrets of nature and everything that has the air of mystery about it attracts our attention in no time. Today we have brought to you the top 10 list of the deadliest fishes found on our earth, read on and enjoy.

You must have heard about them in your science class when in school and many of you had been wondering about their existence. Well, here you go they actually exist and not only exist but, true to their name, they exhibit powerful electric shock; nature has gifted the respective creature with the ability for its survival. As per the resources, the electric eel produces up to 600 volts of electric current, which is enough to kill a man or any other living being.

Apparent from its name, Tiger Fish is one of the most dangerous predator fishes with razor sharp teeth and ability of a true fighter and hunter. The fish is commonly found in the Congo River and Lake Tanganiyaka, situated in Africa; the tiger fish attacks in packs and feasts on large animals. Two of the most widely known tiger fishes are the goliath tiger fish and the tiger fish both of which are the largest among their specie.

Goonch fish is found in the Kali River running between India and Nepal; the fish is a member of catfish family with dangerously sharp teeth and over seven feet long structure. What makes Goonch fish even more dangerous and horrific is its awareness of the taste of human flesh. The alarming number of disappearances and drowning in the Kali River is attributed to this giant man-eater.

The Stonefish is not only one of the most dangerous fish but it is also one of the weirdest sea creatures; Stonefish is an unnoticeable fish as it resembles the surface of a stone and could not be recognised unless you have stepped on it. Stonefish is known to be the most poisonous fish on the living earth, the pain caused

by its sting is incurable and the victim has to suffer for hours. There is a slight discrepancy in the belief that whether or whether not a Stonefish kills though some believe that its only the pain while others argue that it’s poison can kill within two hours.

The Snakehead fish is the original inhabitant of China, Russia and Korea while it can find its way to other countries and their ecosystems too. Once it finds its way to any lake or pond, it eats up all the living beings in the water, after ‘cleaning’ the water, it gets out to the land and eats whatever comes its way until it reaches another water reservoir.

The fish is the true and exact embodiment of the notion ‘Size doesn’t matter’, the fish is about 2.5 cm long and 3.5 mm wide and is also known as ‘the toothpick fish’. The fish causes relatively huge, and we really mean huge, calamity to man; Vandellia is attracted to blood and urine as it extracts its main source of food from it, which is urea. The fish easily passes through anus, vagina or penis and starts sucking blood causing extreme pain to the victim. In many cases amputation is the only remedy to it, which is even more horrifying.

Remember the movie named Piranha having small fishes attacking the beachers? Yes we are talking about the same fish; Piranha’s origination is in South America and Brazil. Similar to Vandellia Cirrhosa, Piranha is small in size with greater extent of danger, it is known for its noxious bite force as it bites its prey to bones in no time.

Pufferfish is ranked amongst the topmost poisonous fish found till the present date; the fish has poison reservoir of tetrodotoxin in its liver, ovaries, intestines and skin. The tetrodotoxin poison affects the brain and may cause weakness, paralysis and death even at a minimum consumption of the poison, which makes it a highly dangerous fish.

Box Jellyfish is different in a number of ways than their other family members as they have more developed nervous system and has real pair of eyes. It has long flagella and deadly poison, according to

resources the Box Jellyfish poison can cause death within few minutes while the marks left by its sting is for eternity. Its poison attacks the cardiac activity as the victim experiences extremely low heart rate.

1. Payara – The Most Dangerous Fish:

Payara is also known as the ‘vampire fish’ and are even more dangerous and vicious predators than the Piranhas. It may grow up to four feet and are absolutely capable of preying fishes nearly of their own size. Apart from having sharp teeth and two front outer tusks, Payara is the only fish that is capable of devouring Piranhas, which marks their deadliness higher than Piranhas. -wonderslist