A fisherman became rich overnight after he caught 157 Ghol fish from a river in Maharashtra, India on the very first day of fishing. 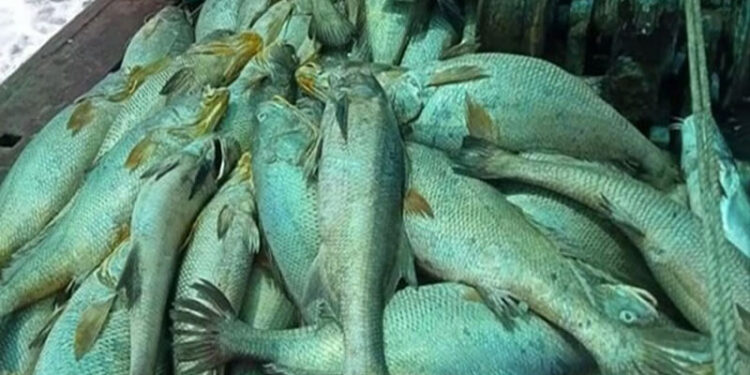 `Ghol’, a type of black-spotted croaker fish, has brought a windfall for the lucky fisherman from Maharashtra’s Palghar district, fetching a price of Rs 1.33 crore.

Notably, fishing was prohibited in Maharashtra for several months owing to the monsoon. On August 15, Chandrakant Tare, the fisherman from Murbe in Palghar, resumed sail with his team and came upon a school of Ghol on August 28, about 25 nautical miles off the coast of Wadhwan in the district.

Tare and his team got a catch of 157 ghol fishes, known as ‘sea gold’ following which auction for the fishes was held in Mumbai.

The entire batch of 157 fish was sold to a group of traders from Uttar Pradesh and Bihar for Rs 1.33 crore, he said. Tare told Hindustan Times that this huge sale will put an end to his financial worries.

A type of croaker fish, it is also aptly known as ‘Sea Gold’ and is considered to be among the most expensive marine fish.

However, these fishes are rare in the area due to pollution and fishermen have to venture deep into the sea to get a good catch. It is in great demand in countries like Indonesia, Thailand, Hong Kong, Singapore, and Malaysia.

Pharmaceutical companies are known to use the fish to make dissolvable stitches while its bladder cures kidney stones, and its heart boosts sex power and immunity.

Its fins are said to have medicinal value and are also used in wine production in Singapore. This fish also contains many vitamins, minerals, proteins, which help in maintaining eyesight.