by ToP
in Politicians
0 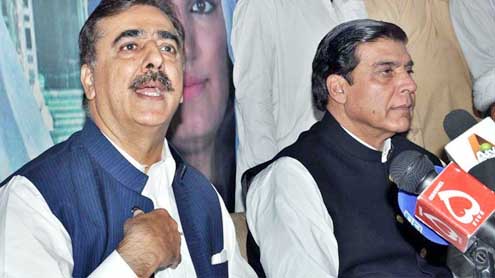 CANDIDATES contesting against two former prime ministers of the country have hoped to turn the table on the rivals and create a history by defeating the big wigs.

At the moment, two former prime ministers, including PML-N President Nawaz Sharif and Secretary General PPP-Parliamentarian Raja Pervaiz Ashraf are contesting from their home seats. Nawaz Sharif, however, is contesting from more than one seat and is yet to witness defeat from any National Assembly seat since 1990. Last defeat he witnessed from an NA seat was from Okara and Multan in 1988 against PPP’s Rao Afzal and Yusuf Raza Gilani.

Raja Pervaiz Ashraf, the PM nominated by PPP in 2012 following the disqualification and conviction of Syed Yusuf Raza Gilani is contesting from NA-51, Rawalpindi II, the seat he won in 2002 and 2008. Chaudhry Shujaat Hussein, the former prime minister for a brief period in 2004 and head of PML-Q isn’t contesting from any seat and holds a seat in Senate.

Although both the former prime ministers at the moment seem to be in a good position in their respective home seats due to multiple reasons, yet the candidates contesting against them are confident to break the status quo. Nawaz Sharif is contesting from NA-120, the seat which comprises a major chunk of previous NA-95 from where Nawaz remained winner from 1985 to 1997. He is challenged by PTI’s Dr Yasmin Rashid, Jamaat-e-Islami’s Hafiz Salman Butt and Zubair Kardar of PPP. Nawaz won for the first time from this seat in 1985.

In 1988, he once again emerged victorious from the seat by defeating PPP’s Arif Iqbal Bhatti. In 1990, Nawaz won against PPP and Tehreek-e-Istaqlal’s joint candidate, Air Marshal (R) Asghar Khan. In 1993, he defeated PPP’s Zia Bakht Butt and Jamaat-e-Islami’s Hafiz Salman Butt whereas in 1997, he again won from the same seat against PPP’s Hafiz Ghulam Mohi-ud-Din. Nawaz couldn’t contest the 2002 and 2008 general elections due to exile as well as conviction by the courts. In 2013, Nawaz is once again back from the same seat after the quashing of all cases made against him in Musharraf era.

In the May 11 general elections, Nawaz has been challenged by two known figures, including former MNA Hafiz Salman Butt and central PTI leader Dr Yasmin Rashid. Hafiz Salman Butt elected MNA in 1985 and 2002, whereas he served MPA in 1990 on IJI ticket. Dr Yasmin Rashid, who is also known for her struggle from the platform of medical fraternity, hails from a known political family of the area. Her father-in-law, Malik Ghulam Nabi, a former PPP stalwart remained a provincial minister in Bhutto era whereas Shahid Nabi Malik, another member of her family contested in 1990, 1993 and 1997 elections from the same area. Yasmin Rashid, however, joined PTI in 2010 and is also a senior office-bearer in Punjab.

Dr Yasmin Rashid, while talking to The News said that Tsunami of Imran Khan was visible in NA-120 and this election would be the last of the Rai Wind politicians. She said that those who declared this constituency as their bastion were running campaign through their relatives and were not even visiting the constituency when general elections were round the corner. She also said that PTI victory was writing on the wall. PML-N leadership, however, claimed to win the seat once again with big margin. The provincial candidates of PML-N from the constituency include Bilal Yaseen and Majid Zahoor. The contest from NA-51 has also brought the constituency into limelight due to the presence of former PM Raja Pervaiz Ashraf. Raja Javed Akhlas, the major political rival of Raja Pervaiz Ashraf and candidate of PML-N from NA-51 expressed the hope to repeat history by defeating his opponent with the help of public support.

“The era of corruption will end for good now and PML-N will defeat the elements who robbed national wealth” said Raja Javed Akhlas, the former MPA and district Nazim of Rawalpindi. Raja Javed, who is contesting his fifth election against Raja Pervaiz Ashraf stated that even now, the development projects were being executed by the PPP candidate to attract voters but people of Gujjar Khan will give a clear verdict in favour of PML-N. Raja Javed Akhlas, an MPA of IJI and later PML-N in 1988, 1990, 1993 and 1997 elections have won against Raja three times, twice in general elections and once in Local Government elections.

The group of Chaudhry Riaz and former MNA Khursheed Zaman which is out of the poll race is also going to play a key role in the contest. PPP seems once again lucky at the moment due to the massive split of its rival votes and its workers envisage a clear cut victory. ‘The victory of PPP is writing on the wall, it will win the election with an even bigger margin now” said Khurram Pervaiz Raja, son of Raja Pervaiz Ashraf while talking to The News. Khurram Pervaiz has also contested on PPP ticket in 2008 elections against Chaudhry Nisar but lost.