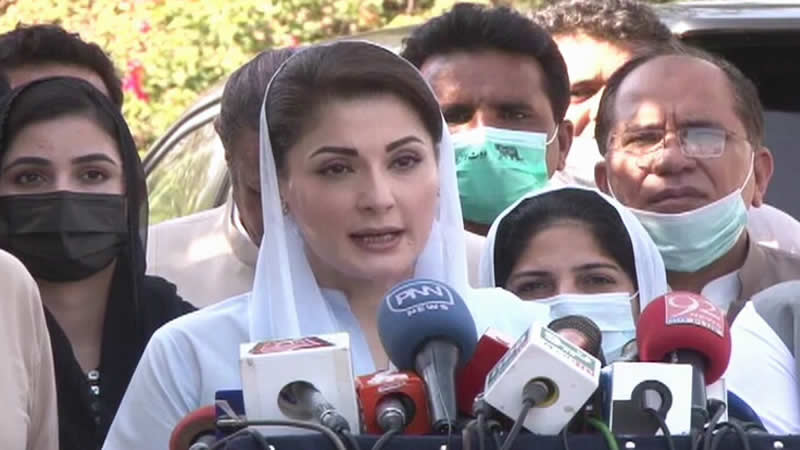 Breaking her nearly a month-long mysterious silence, Pakis­tan Muslim League-Nawaz (PML-N) vice president Maryam Nawaz on Tuesday expressed concern over reports about “secret talks” between India and Pakistan and declared that this time the people of Pakistan and Kashmir would not let the government do “another bargain” on the Kashmir issue.

“If some people are making a decision on Kashmir while keeping it secret with the people, especially Kashmiris, and the parliament, and if they believe that they would again do it like they previously threw Kashmir into India’s lap by allowing it to annex (the disputed territory) with the country ………, then listen, we will not let you do anything against the wishes of the people of Kashmir,” declared Ms Maryam.

When a reporter asked a question quoting the top military official to have criticised the opposition for accusing the government of selling off Kashmir despite the fact that former prime minister Shahid Khaqan Abbasi was taken on board during a meeting with the army chief on the issue, Ms Nawaz simply replied that talks with India didn’t mean a “Kashmir sell-off”.

“What talks are being held (by those) sitting in other countries? Are you silently doing a deal? What discussions are being held on Kashmir? What give-and-take is being done in the name of friendship?” asked Ms Maryam, demanding that “everything should be brought before the public”.

Taking the mike, Mr Abbasi simply said the Kashmir issue was not a sport.

“Off-the-record conversation should be kept off-the-record. You will get a reply when something will be on the record,” said Mr Abbasi.

Ms Maryam’s comments came days after publishing of reports in international and local media that the top intelligence officers from Pakistan and India had held secret talks in Dubai (the UAE) in January in a fresh effort to calm tensions over Kashmir after reopening of a back channel of diplomacy by the two countries aimed at a modest roadmap to normalising ties over the next several months.

It was reported that the officials from Pakistan’s Inter-Services Intelligence and the Research and Analysis Wing, India’s external spy agency, travelled to Dubai for a meeting facilitated by the UAE government.

Foreign Minister Shah Mahmood Qureshi, however, in an interview to a Turkish magazine denied these reports.

“We are not having any peace talks at the moment and the UAE is not facilitating anything,” the foreign minister had reportedly stated in the interview conducted by the magazine in Istanbul on April 23.

On this occasion, AJK Prime Minister Raja Farooq Haider said that any effort to rig the elections would amount to support the narrative of India and its Prime Minister Narendra Modi.

Ms Maryam said that she would go to AJK for her party’s election campaign and said that party’s supreme leader Nawaz Sharif was also monitoring the activities and in touch with them while sitting in London. She expressed the hope that the PML-N would win the elections in AJK.

Referring to some video clips, she said the PTI people who had gone for the campaigning in NA-249 constituency in Karachi had to run away from the area because of the people’s wrath.

“I will call this government a curse because it is because of it the people are facing difficulties,” she said.

In response to a question, Ms Maryam also made a clarification about her recent TV interview in which she had been quoted as saying that the PML-N wanted to see the present government completing its five-year term.

Ms Maryam clarified that had the things in the hands of the PML-N, they would have allowed the present rulers to be completely exposed before the masses. She said that perhaps they would tolerate this “incapable and incompetent government”, but the people of this country would not be able to bear it.