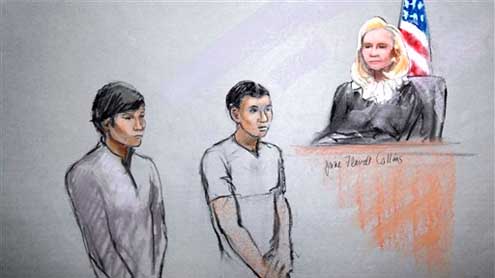 BOSTON: Three college friends of Boston Marathon bombing suspect Dzhokhar Tsarnaev were arrested and accused Wednesday of trying to protect him by going into his dorm room and getting rid of a backpack filled with hollowed-out fireworks three days after the deadly attack.

The three 19-year-olds were not accused of any role in the bombing. But in a footnote in the court papers outlining the charges, the FBI said that about a month before the tragedy, Tsarnaev told two of them that he knew how to make a bomb.Azamat Tazhayakov and Dias Kadyrbayev, both of whom came to the U.S. from Kazakhstan, were charged with conspiring to obstruct justice by concealing and destroying evidence. Robel Phillipos, who graduated from a Cambridge high school with Tsarnaev, was charged with lying to investigators about the visit to Tsarnaev’s room.

According to the FBI account, just hours after surveillance camera photos of the Boston Marathon suspects were flashed around the world April 18, Tsnarnaev’s friends suspected he was one of the bombers and removed the backpack along with a laptop from Tsarnaev’s room at the University of Massachusetts Dartmouth.One of them later threw the backpack in the garbage, and it wound up in a landfill, where it was discovered by law enforcement officers last week, authorities said. In the backpack were fireworks that had been emptied of their gunpowder.

The lawyers for the Kazakh students said their clients had nothing to do with the bombing and were just as shocked by the crime as everyone else. Phillipos’ attorney, Derege Demissie, said outside court: “The only allegation is he made a misrepresentation.”At a court appearance, the Kazakh students did not request bail and will be held for another hearing May 14. Phillipos was held for a hearing on Monday. If convicted, Kadyrbayev and Tazhayakov could get up to five years in prison and a $250,000 fine. Phillipos faces a maximum of eight years behind bars and a $250,000 fine.

Three people were killed and more than 260 wounded on April 15 when two bombs exploded near the marathon’s finish line. Tamerlan Tsarnaev, 26, died after a gunfight with police days later. His 19-year-old brother was captured and lies in a prison hospital. Their mother has said the allegations against them are lies.Investigators have not said whether the pressure cooker bombs used in the attacks were made with gunpowder extracted from fireworks.Kadyrbayev and Tazhayakov have been in jail for more than a week on allegations they were in violation of their student visas, one because he was skipping classes, the other because he was no longer enrolled. All three men charged Wednesday began attending UMass with Tsarnaev in 2011, according to the FBI.

Tazhayakov was allowed to return to the U.S. from Kazakhstan in January despite not having a valid student visa, a federal law enforcement official told The Associated Press. His student visa status had been terminated because he was academically dismissed from the university, said the official, who was not authorized to discuss the case and spoke on condition of anonymity.

The FBI said that before Tsarnaev’s roommate let the three friends into the room, Kadyrbayev received a text message from Tsarnaev that read: “I’m about to leave if you need something in my room take it,” according to the FBI. When Tazhayakov learned of the message, “he believed he would never see Tsarnaev alive again,” the FBI said in the affidavit.It was unclear from the court papers whether authorities believe that was an instruction from Tsarnaev to destroy evidence.Once inside Tsarnaev’s room, the men noticed a backpack containing fireworks, which had been opened and emptied of gunpowder, the FBI said. The FBI said that Kadyrbayev knew when he saw the fireworks that Tsarnaev was involved in the bombings and decided to remove the backpack “to help his friend Tsarnaev avoid trouble.”

Kadyrbayev also decided to remove Tsarnaev’s laptop “because he did not want Tsarnaev’s roommate to think he was stealing or behaving suspiciously by just taking the backpack,” the FBI said.After the three returned to Kadyrbayev’s and Tazhayakov’s apartment with the backpack and computer, they watched news reports featuring photographs of Tsarnaev. The FBI said Kadyrbayev told authorities the three men then “collectively decided to throw the backpack and fireworks into the trash because they did not want Tsarnaev to get into trouble.”

Kadyrbayev said he placed the backpack and fireworks along with trash from the apartment into a large trash bag and threw it into a garbage bin near the men’s apartment, according to court papers.When the backpack was later found, inside it was a UMass-Dartmouth homework assignment sheet from a class Tsarnaev was taking, the FBI said.The court papers do not say what happened to the laptop.In a footnote, the FBI said: “Tazhayakov also informed the FBI agents that while eating a meal with Dzhokhar and Kadrybayev approximately one month prior to the marathon bombing, Dzhokhar had explained to Kadyrbayev and Tazhayakov that he knew how to make a bomb.”

Robert Stahl, an attorney for Kadyrbayev, said his client “absolutely denies the charges” and didn’t know that the backpack and fireworks were part of the bombing case. Kadyrbayev is “just as shocked and horrified by the violence in Boston that took place as the rest of the community is,” the lawyer said.He also denied that Kadyrbayev instantly recognized Tsarnaev’s photo and said Kadyrbayev didn’t know Tsarnaev was involved in the bombing: “His first inkling came much later,” he said.

Tazhayakov’s lawyer, Harlan Protass, said Tazhayakov “feels horrible and was shocked to hear that someone he knew at the University of Massachusetts-Dartmouth was involved with the Boston Marathon bombing.”Kadyrbayev and Tazhayakov lived at an off-campus apartment in New Bedford, about 60 miles south of Boston, and got around in a car registered to Kadyrbayev with a souvenir plate that read “Terrorista (hash)1.” The car was pictured on Tsarnaev’s Twitter feed in March.

The plate was a gag gift from some of Kadyrbayev’s friends, meant to invoke his penchant for late-night partying rather than his political sentiments, Kadyrbayev’s lawyer said last week.Michael McKeown, 20, attended Cambridge Rindge and Latin High School with Tsarnaev and Phillipos.”He wasn’t a stupid kid,” the Boston University sophomore said of Phillipos. “I’m surprised he would do something this foolish.” – YahooNews