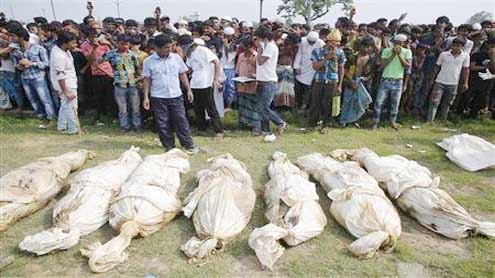 DHAKA: The European Union is considering trade action against Bangladesh, which has preferential access to EU markets for its garments, to pressure Dhaka to improve safety standards after a building collapse killed more than 400 factory workers.

Pope Francis condemned the conditions of workers who died in the disaster as “slave labor”, while in Dhaka several thousand workers rallied to mark Labour Day, some calling for capital punishment for those responsible for the tragedy.”The owner of the building … should be hanged to death and compensation should be given to the injured and those who died,” said labor leader Moshrefa Mishu. “A healthy and safe atmosphere should be made in the factories.”

Duty-free access offered by Western countries and low wages have helped turn Bangladesh’s garment exports into a $19 billion a year industry, with 60 percent of clothes going to Europe.Any action by the EU on Bangladesh’s duty-free and quota-free access would require the agreement of all member states and could take more than a year to implement.”The European Union calls upon the Bangladeshi authorities to act immediately to ensure that factories across the country comply with international labor standards …,” the 27-nation bloc said in a statement issued by EU foreign policy chief Catherine Ashton and Trade Commissioner Karel de Gucht.

In the United States, prominent Democrats Sander Levin and George Miller wrote a letter to President Barack Obama urging him to facilitate the development of a concrete plan of action to address the range of issues relating to working conditions and worker rights in the garment sector in Bangladesh.The death toll from the collapse last week of the illegally built Rana Plaza in Dhaka’s commercial suburb of Savar rose to 411 on Wednesday, and about 40 unidentified victims were buried. One woman at the cemetery collapsed into tears when she recognized the body of her sister by her dress.

“SHOT ACROSS THE BOWS”

With local anger growing over the country’s worst industrial accident, a delegation from the International Labour Organisation met Prime Minister Sheikh Hasina in Dhaka to offer support and press for action to prevent any more such incidents.The EU had already urged Bangladesh to adhere to ILO standards in January after two earlier factory fires, including one last November in which 112 people died.A European Union official said the latest EU statement, issued late on Tuesday, was “a shot across the bows”. “We want to turn up the diplomatic heat on them and get them to sit down and discuss this with us.” [ID:nL6N0DI0QH]

About 3.6 million people work in Bangladesh’s garment industry, making it the world’s second-largest apparel exporter behind China. The industry employs mostly women, some of whom earn as little as $38 a month.The Bangladeshi prime minister warned factory owners they would have to take care of their workers. “You will have to ensure workers’ fair wages, allowances and other rights … you must look after their workplace safety if you want to do business,” she told a discussion forum.Pope Francis added to pressure for change in his toughest remarks on workers’ rights since his election on March 13, an indication he plans to make social justice a plank of his pontificate.

“Living on 38 euros ($50) a month – that was the pay of these people who died. That is called slave labor,” Francis said in a private impromptu sermon at his personal morning Mass in his residence, Vatican Radio reported.There were about 3,000 people inside the complex, which was built on a swamp, when it collapsed. About 2,500 people have been rescued, many injured, but many remain unaccounted for.”Why are they taking so much time to pull out bodies?” asked a grief-stricken father who, like many others, has been waiting on the streets near the collapsed factory, hoping for information about his son.

Police said DNA samples of the bodies buried on Wednesday had been preserved, so tests could be done if relatives came forward later.The building’s owner Mohammed Sohel Rana and his father, Abdul Khalek, are among eight people arrested so far, and police are seeking a fifth factory boss, Spanish citizen David Mayor, although it was unclear whether he was in Bangladesh at the time of the accident.

The factory collapse was the third deadly incident in six months to raise questions about worker safety and labor conditions in the poor South Asian country, which relies on garments for 80 percent of its exports. Clothes made in five factories inside the Rana Plaza building were produced for retailers in Europe and Canada.In the year to June 2012, Bangladesh’s garment exports to the EU rose to $11.37 billion from $10.52 billion a year earlier, according to Bangladesh’s commerce ministry. Germany is the main EU market at $3.4 billion, followed by the UK at $2.13 billion, Spain at $1.71 billion and France at $1.27 billion.

Bangladesh’s next biggest garment export market is the United States, which accounts for 23 percent, or $4.53 billion.”The EU is presently considering appropriate action, including through the Generalised System of Preferences – through which Bangladesh currently receives duty-free and quota-free access to the EU market,” Ashton and de Gucht said.”The sheer scale of this disaster and the alleged criminality around the building’s construction is finally becoming clear to the world.”

The Ethical Trading Initiative (ETI), an umbrella organization that brings NGOs, unions and brands together to try to improve working conditions, said retailers, major brands and the suppliers who own the factories would have to contribute towards factory inspections.”Bangladeshi companies who supply to our retailers need to be pricing in operating a decent factory, a safe factory and paying proper wages,” ETI director Peter McAllister told Reuters.

“And then the retail world needs to recognize that the real cost of having sustainable businesses are going to be higher,” he said, adding that he thought retailers would accept slightly higher prices if all outlets agreed to the changes.Following a private emergency meeting of Canadian retailers, the Retail Council of Canada said on Tuesday it would develop a new set of guidelines. That meeting brought together retailers including Loblaw, Sears Canada Inc and Wal-Mart Canada, to discuss how to deal with the tragedy.

Loblaw Executive Chairman Galen Weston said the company would take further action “to address the situation” following the collapse of the building, where some of its “Joe Fresh” garments were made, although he did not offer specifics.Representatives of some 45 companies, including Gap Inc, H&M, J.C. Penney, Nike Inc, Wal-Mart, Britain’s Primark, Marks & Spencer and Tesco, and Li & Fung, met officials from the Bangladesh Garment Manufacturers and Exporters Association in Dhaka this week to discuss worker and plant safety.Primark and Loblaw have promised to compensate the families of garment workers killed while making their clothes. – YahooNews