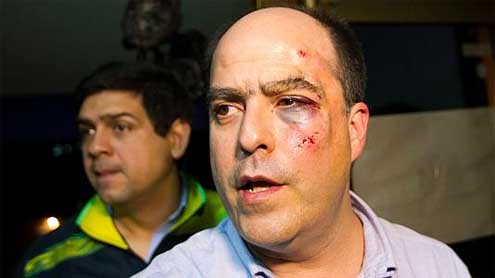 Fistfights have broken out in Venezuela’s parliament over the recent disputed presidential election.Several legislators were left bloodied and bruised, with both opposition and pro-government lawmakers accusing each other of starting the fight.

A measure was earlier passed denying MPs the right to speak until they recognised Nicolas Maduro as president.Official results show he narrowly beat opposition candidate Henrique Capriles, who has demanded a full recount.The National Electoral Council (CNE) – which has rejected Mr Capriles’ demand – on Monday said Mr Maduro had won by 1.49 percentage points, or fewer than 225,000 votes.

This came after the council had amended the final result, taking into account votes cast abroad.In all, 99.79% of the votes have now been counted.Earlier figures had shown a victory of 1.8 percentage points for Mr Maduro, who stood in the poll as the chosen successor of the late President Hugo Chavez. On Tuesday, the opposition said a number of its lawmakers were attacked and hurt in the parliament – the National Assembly.One of the MPs, Julio Borges, later appeared on a local TV station with facial bruises.

“They can beat us, jail us, kill us, but we will not sell out our principles,” Mr Borges was quoted as saying.”These blows give us more strength.”The opposition said it was being “silenced” by National Assembly President Diosdado Cabello.”I am going to ask you: Mr Deputy, do you recognise Nicolas Maduro?” Mr Cabello asked one of them. “If you say no, you don’t get to speak in the assembly.”Pro-government representatives blamed the opposition for starting the clashes.

“Today again I had to defend [Hugo Chavez’s] legacy,” lawmaker Odalis Monzon was quoted as saying by Reuters. She added that she and several of her colleagues were attacked and beaten during the fighting.The CNE declared President Maduro the winner on 15 April, after he had gained what it called an “irreversible majority”. He was sworn in on 19 April.Mr Capriles has demanded a vote-by-vote recount, but the CNE said it would be legally impossible to carry out.It has, however, agreed to carry out a partial audit, which is expected to take until June. During the audit, 56% of the votes cast will be examined.

The CNE says the remaining 44% had been checked immediately after the election.On Monday, Mr Capriles said Mr Maduro had “illegitimately stolen the presidency”,He has until 6 May to lodge his request with the Supreme Court contesting the election result.Mr Capriles said he had “no doubt that this will end up before an international body”.Both Mr Capriles and Mr Maduro have urged their supporters to turn out for separate demonstrations on 1 May, sparking fears the two camps could clash.

Mr Maduro on Monday said he had changed the route of his march because he “did not want problems”.But the opposition says it continues to be targeted by the government, citing the arrest on Saturday of retired Gen Antonio Rivero as proof.The opposition politician has been charged with criminal instigation and criminal association, after prosecutors blamed him for outbreaks of post-election violence.Relatives of Gen Rivero says he is on a hunger strike in protest. – BBC