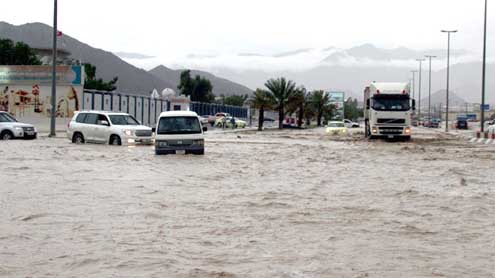 Rains swept the region, including Fujairah and Delma Island in the UAE on Wednesday causing deaths and widespread damage. Saudi Arabia reported 16 deaths and three people missing in flash floods, while two others perished in Oman.

In Fujairah, the downpour lasted two hours and wreaked havoc in low lying areas damaging houses and flooding farms in Sakakam. Power supply was also disrupted, officials said.Rescue officials said 23 girls were moved to safety after their college bus was trapped in a water-logged area.Residents near Sahm and Farfar valleys were trapped inside their homes as water cut the exit to a road. Residents of Wadi Sahm were stranded in the area after a newly built road was swept away by the force of the water. Al Faseel was another affected residential area.

Police appealed to motorists to exercise caution when driving through valleys. Civil defence teams have been deployed in the emirate to deal with any crisis and all agencies have been put on high alert.Rock and sand rolled down the Khalifa highway which resulted in the partial closure of the road. Traffic near Al Buthna on the Shaikh Maktoum Road towards Fujairah was also disrupted.

Moderate to heavy rains lashed Delma Island in the Western Region of Al Gharbia. The sky continues to be overcast and more rains are predicted in most parts of the region.Meanwhile, in Saudi Arabia, the official Saudi SPA state news agency quoted Colonel Abdullah Al Harethi as saying people died in several areas including in the capital Riyadh, Baha in the south, Hail in the north and in the west.Harethi urged people to avoid wadi valleys and plains that have been flooded by heavy rainfall that began on Friday.

Television footage showed 4X4 vehicles stuck in the middle of wadis and people clinging to a tree to escape fast-flowing flood waters.The vast Arabian Peninsula country has not experienced such a high volume of rainfall for 25 years.But around 10 people were killed in 2011 when flooding swept through the western city of Jeddah, where 123 people also perished in floods in 2009.The inability of Jeddah’s infrastructure to drain off flood waters and uncontrolled construction in and around the city were blamed at the time for the high number of victims. – KahleejNews