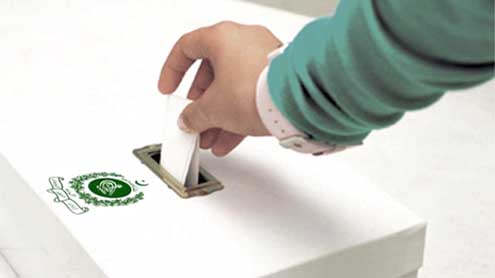 Rawalpindi: There are so many candidates including of the most popular PTI in the run to win the National Assembly (NA) 54 seat but the candidates of PML-N, the former ruling party in the province, are on driving seat to rule the cantonment for next five years.

PML-N Malik Abrar Ahmed, former MNA, Chaudhry Muhammad Ayaz, former MPA, Zamurad Khan of PPP, Jamat-e-Islami (JI) Rizwan Ahmed and PTI’s Hina Mansoor and Umer are the main candidates flexing their muscles for May 11 battle but the main contest is expected between Malik Abrar and Zamurad Khan. During a survey, conducted by The Nation on Monday, a large number of people pledged to vote for N Leaguers, as according to them, Nawaz Sharif and his team has the capability to steer the country out of crises.

Like several other constituencies of Punjab, NA-54, comprising Cantonment and sub urban areas of Rawalpindi, is the stronghold of PML-N since 1990. Earlier, this constituency had belonged to PPP. In the 1985 non-party elections during General Zia ul Haq regime independent candidate Raja Shahid Zafar had won from this constituency. However, in 1988 general elections, PPP awarded its ticket to Raja Shahid Zafar who had retained his seat defeating Ejazul Haq son of later General Ziaul Haq. But in 1990 elections, Ejazul Haq captured the seat on the ticket of PML-N, defeating Raja Shahid Zafar by convincing margin. Since then, PML-N candidates retained both NA and PP seats from this constituency defeating tough rivals like PPP’s Zamurad Khan. In the 2008 elections, PML-N candidate Malik Abrar defeat PPP’s Zamurad Khan by wide margin to become MNA from NA-54.

Again in the forthcoming general elections PML-N leadership posing confidence in Malik Abrar has awarded party ticket to him for contesting from this important constituency whose population comprises mostly serving and retired army personnel, civil servants and other settlers of different bradaris. Though Zamurad Khan has been on the losing side for the last one decade, however, PPP leadership considers him as strong candidate of the party compared to other leaders in this constituency. On this basis, Zamurad Khan has again succeeded to get PPP ticket to contest elections against his political opponents from NA-54.

The emerging PTI over the last couple of years in political scenario of the country has fielded a lady candidate Hina Mansoor which is indeed a new face and unknown in political circles for the entire people of Rawalpindi in general and NA-54 in particular. To pit a woman candidate in the contest against the heavyweights like Malik Abrar and Zamurad Khan only PTI chairman Imran Khan would be knowing the secret strategy behind it and the public would come to know only after the result if any upset is seen in NA-54. JI has also fielded Rizwan Ahmed who is not much popular among traders, businessmen and other local people. Though Rizwan Ahmed in his student and college days has remained active member of ATI and took part in affairs of country’s politics at the platform of JI but still it seems very hard for this young lad to turn tables over PML-N Malik Abrar and PPP’s Zamurad Khan if not Hina Mansoor of PTI.

Even the name of Imran Khan is not enough for Hina Mansoor to win ticket for her party particularly when this constituency is the stronghold of PML-N.On the other hand the PML-N leader and ex-MNA, Malik Abrar enjoys strong position among the books of the citizens belonging to his constituency. The main factor behind it is the enforcement of developmental schemes and launching of health and educational projects and deliverance of basic services in NA-54 by Malik Abrar during his tenure as MNA. He was helped by the then Shahbaz Sharif’s led  Punjab government has been able to allocate billions of rupees to the civic bodies like RCB through Malik Abrar for carrying out mega developmental and beautifications projects in his constituency.

Senior officials also acknowledge the fact of provision of huge amount by Malik Abrar for the development purposes in his constituency. On this basis, this PML-N backed candidate holds clean edge over all his political rivals in the run for NA-54 in coming general elections.Despite this fact, PPP’s Zamurad Khan well known at local and national level is considered to be a real threat for Malik Abrar this time.  Though Zamurad lost to Malik Abrar for couple of times in previous elections but at present, Khan has come strongly because of his enhanced popularity while serving as Chairman of Pakistan Bait ul Maal. People of Rawalpindi are seeing him with great respect despite the failure of his PPP government over the last five years in the government.

According to people as Baitul Maal chairman, Zamurad Khan served orphans, widows and needy persons , providing them all kind of support to them by keeping aside his political affiliations on one side. This has helped a lot to emerge strongly among the people of his constituency and convincing his party leadership to award him ticket again from NA-54. Besides this, Zamurad also played active role in national affairs of the country, which emerged and remained critical particularly during report of the Memo Commission and trial against former prime minister Yousuf Raza Gillani.

However, one thing really makes even Zamurad Khan uncomfortable against Malik Abrar that is the poor show of his PPP government over last five years. People if not with Zamurad Khan but are really fed up with PPP leadership for failing to deliver and instead increasing miseries for them in the shape of gas and power load shedding, unprecedented price hike, rampant corruption and poor law and order situation.It would certainly create a negative impact and become a telling factor for him in the elections particularly against PML-N leader, Malik Abrar who seems well determined and confident to retain his seat from NA-54.

If Zamurad doesn’t admits this fact openly but at inner side would indeed be feeling bad about his possible chances of loss on the basis of poor performance of his government.The JI candidate, Rizwan Ahmed considered to be the weakest of all political opponents in NA-54, however is making lot of efforts in his electioneering to come in the forefront of his rivals. Despite all this, he is overshadowed by all his political opponents in the run for NA-54 seat. PTI’s Hina and young Umer may face tough time on May 11. – Nation