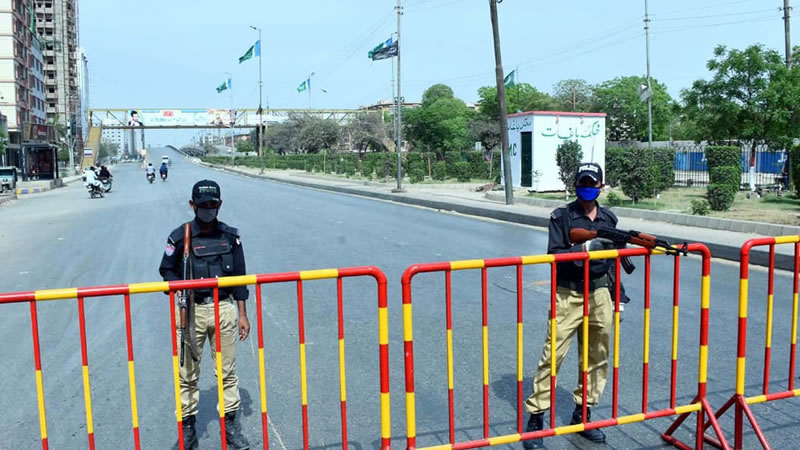 A two-week ‘smart lockdown’ was implemented in various localities of Karachi, identified by provincial and district authorities as coronavirus hotspots, on Thursday evening.

The move came as cases continue to spiral upwards in the port city, with localities forming Covid-19 clusters to be sealed for a period of two weeks, beginning 7pm on Thursday – the same day that Sindh saw its highest single-day death toll from the virus. According to the Sindh chief minister, Covid-19 had claimed 48 lives in the province on the day, with the emergence of another 2,286 patients as well.

A complete lockdown is to be implemented in these areas until July 2, 2020, whereby movement will be restricted and business activity suspended. Only grocery and pharmacy stores will be permitted to operate, Monday through Friday, from 6am to 7pm, according to the Karachi commissioner’s office.

All persons entering and exiting the sealed areas will be required to wear masks, according to the notification issued by the commissioner’s office late on Wednesday night.

Directives issued earlier will be in place once again, with only one member of a household, carrying their CNIC, allowed to leave the house to purchase groceries, medicines and other essential items.

Home delivery or takeaway from eateries will also not be permitted in the sealed areas, nor will gatherings be allowed in private residences. Public transport and private ride-hailing services have also been barred in these localities.

The notification further states that the Sindh government will make every effort to provide rations to the needy in these areas, via philanthropic organisations and its own resources, while also striving to provide mobile dispensaries and mobile utility stores.

Despite the government’s announcement, though, shopkeepers and residents in many localities to be sealed continued their routine activities, waiting for the authorities to make the first move for the closure.

A shopkeeper in Lyari’s Agra Taj Colony kept his store open. “It’s 9:30pm, but no one has asked me to shut the shop. Everything else is open too,” he said, adding that he would only close down if the police arrived.

Another shopkeeper in Saddar, too, kept his eye on the activities of others, insisting that he would only close his shop if other business activities were also halted.

Meanwhile, the government’s orders met a poor response from residents too. “We won’t obey the orders of the state so easily,” argued Abdul Qayyum, who lives at Tariq Road. “Law enforcement officials will have to force us to go home.”

South DC Irshad Ahmed Sodhar explained that the police were being deployed in selected areas, adding that the lockdown would effectively be visible on Friday. According to him, the main challenge lay in densely populated areas and business hubs. “But the trader community has assured us of complete cooperation,” he added.