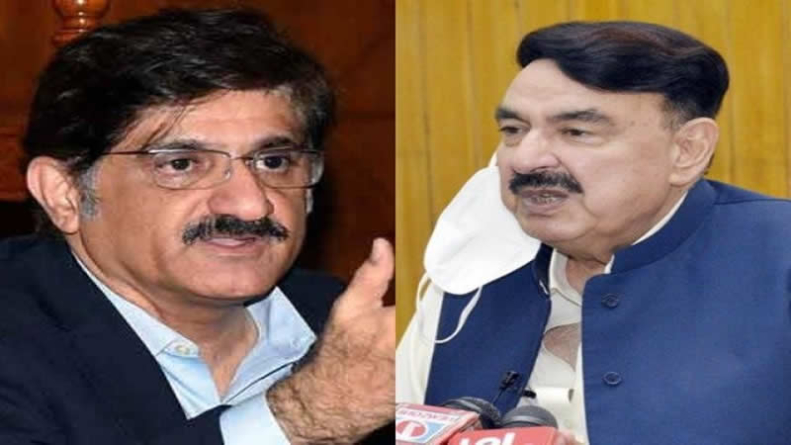 Interior Minister Sheikh Rashid denied the notion that the Prime Minister Imran Khan wanted to interfere in the affairs of Sindh, stressing that the federal government would not go against Sindh’s authority granted under the 18th Constitutional Amendment.

Addressing a press conference after his meetings with Governor Imran Ismail and Chief Minister Murad Ali Shah the minister repeated his earlier statement that ‘governor raj’ was not being imposed on Sindh but the province would purged of ‘dacoit raj’.

“Peace is the common goal for both Sindh and the Centre. Prime Minister Imran Khan does not want to interfere in Sindh’s affairs, nor is there any chance of governor’s rule in the province,” Rashid told reporters. “But Dakoo [dacoit] raj in Sindh will be eliminated.”

The interior minister told reporters that the Sindh Rangers was ready to work with the police in the operation against the dacoits. The Sindh government has the discretion to use the Rangers wherever it wants,” he added. “We are even ready to provide drones to the [Sindh] police.”

The minister dashed to Karachi on Wednesday on the instruction of the prime minister to review the law and order situation in the province and report back to him. Rashid said that he would submit his report regarding the problems of Sindh to the prime minister on his return.

Referring to his meetings in Karachi with the governor, the chief minister, the director general of the Sindh Rangers and heads of other law-enforcement agencies, the minister said that it had been agreed that Sindh and the Centre would work together to deal with the dacoits.

“There are no differences between the province and the Centre on the issue of human lives and all institutions are on one page that the Dako raj must end,” he said. He told reporters that he would hold meetings with the chief minister every month on this issue.

Responding to a question about the situation in Karachi, the minister said that the issue in the metropolis was about street crimes. “There is no need for operation in Karachi,” he said. “I will visit riverine area after completion of the operation against dacoits. We want to clean these areas.”

Sheikh Rashid said that he would not go against the powers of Sindh government under the 18th Amendment. He said his visit was not political, adding that he would present his report on the law and order situation in Sindh to the prime minister.

When asked about his relations with the Muttahida Qaumi Movement (MQM) the minister said in lighter vein that he had good relations with the MQM since his childhood. About Pakistan Tehreek-e-Insaf (PTI) leader Jahangir Tareen, he said he had no knowledge about the cases against Tareen.

About the coming budget, Rashid said that inflation had risen all over the world, therefore, the salaries of salaried people should be increased. He added that he had also asked Finance Minister Shaukat Tareen that the solution to inflation was to increase salaries.

The minister stated categorically that no military bases would be given to any country by the Imran Khan government. “No airbases are being given. Pakistan is a responsible country. In Afghanistan, the United States, China, Russia, Iran and Pakistan will have a common mechanism.”

Talking about the National Database and Registration Authority (NADRA), the interior minister said that some corrupt officials in NADRA Karachi have been arrested. “Fake identity cards were made for people who were later found involved in terrorism. All cases will be investigated.”

Earlier in the day, Rashid held separate meetings with Chief Minister Shah and Governor Ismail and discussed the law and order situation in the province. In the meetings, they agreed that mutual coordination was crucial to combat criminals.

The chief minister informed the interior minister that riverine area in Shikarpura and Kashmore districts had a thick forest cover, so the bandits had established their hideouts. “They commit crime in the settled area and then hide in the riverine area,” he added.

Shah added that an operation against the dacoits was in progress and so far, police had arrested 11 accused and destroyed six hide-outs. “I have personally visited Shikarpur to meet policemen and the families of Shaheed,” he said.

Rashid said the Rangers were at the disposal of Sindh chief minister and their services could be utilised for the operation. During the meeting, Inspector General of Sindh Police Mushtaq Maher said that some equipment were required for the operation. Rashid asked the IG to coordinate with the interior secretary, who would ensure their provision.

Talking to the government, Rashid warned that strict action would be taken against those who disrupted law and order in Sindh. “All possible measures would be taken to maintain peace in the province,” he said, according to a news release.