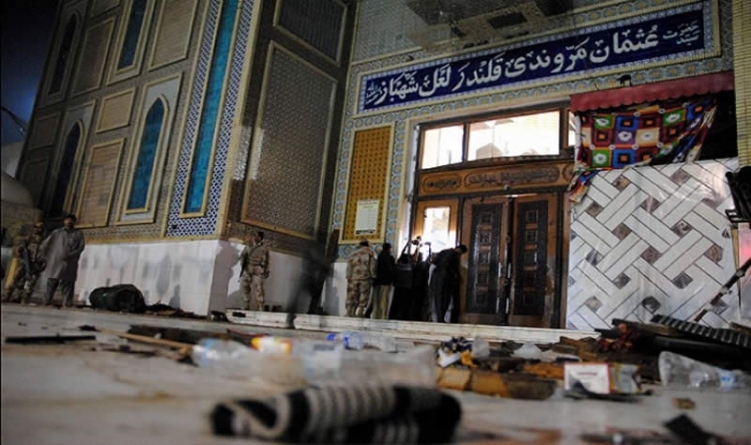 A key suspect involved in the bloody suicide attack targeting the shrine of Lal Shahbaz Qalandar in Sehwan earlier this year was arrested at an unspecified date in a joint operation conducted by the Rangers and Counter-Terrorism Department (CTD) in Manghopir, it was announced today.

A cache of weapons and explosive material was recovered from the possession of the terrorist, identified as Nadir Ali by DIG Farooq.

The deadly attack on the shrine of Lal Shahbaz Qalandar, which was claimed by the militant Islamic State (IS) group, had resulted in the deaths of at least 88 people and left at least 150 others wounded.

Following the bloodbath, the army had launched Operation Raddul Fasaad, saying it was aimed at eliminating the “residual/latent threat of terrorism”. DIG Farooq said the foothold of IS had been weakened in Pakistan after several operations targeting its operatives.

“After the Mastung Operation, one by one their [IS] militants are being captured. Today, [the key suspect in the shrine attack] has been arrested. They have become very weak here,” the DIG CTD said.

“Their people have escaped and the group’s presence is found across the border in Afghanistan,” Farooq said.

“They (IS) were not operating here. The group’s elements used to be associated with various political parties, primarily the Lashkar-e-Jhangvi. Then they went towards IS,” he added.

“Foreign elements are definitely involved in incidents of terrorism ─ they fund, train and assign targets to these groups,” he said.

However, the DIG said that the army’s operations had limited the group.

“They have been eliminated now,” he claimed.