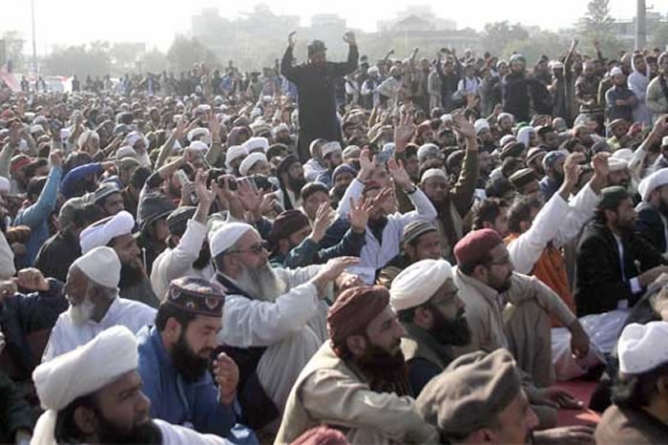 Another round of talks between the government and the rightist movements have inconclusievly ended in Punjab House on Monday with the sit-in protest continuing for an indefinite period of time. The fifth round of talks ended in a consecutive failure today as the meeting convened in Punjab House today concluded with the deadlock persisting between the government and the protesters occupying Faizabad. In another effort to call off the protest in a peaceful way, Punjab law minister Rana Sanaullah, minister for railways Khawaja Saad Rafique and law minister Zahid Hamid called on the leaders of Tehreek-e-Labbaik Ya Rasool Allah Pakistan and Sunni Tehreek in Punjab House today.

Reportedly, the government has maintained again that the deadlock would end within coming 24 to 48 hours. Last week, heavy contingents of Rangers, Frontier Corps (FC) and police were deployed in the area whereas armored vehicles, prison vans and ambulances also made available. Administration of the twin cities had delayed decision to use force against protesters after fourth round of talks ended at residence of Raja Zafarul Haq last night. Protesting bodies represented by Dr Shafiq Ameeni, Sheikh Azhar and Pir Ijaz Sherani convened the fourth round of talks at Raja Zafarul Haq’s residence with the government and returned to the protesting site. Interior minister Ahsan Iqbal and Islamabad Mayor Sheikh Ansar among others represented the delegation of the government while a cleric from Golara Sharif Ghulamulddin Jami mediated the talks. The locals of the twin cities are under a miserable scenario as the sit-in has shut down Faizabad M2 interchange from all the sides, forcing locals to reach their destinations through using routes and in extended hours instead of minutes. Disrupted traffic flow on the alternative routes have become a routine.

Moreover, mobile services in I-8 and Faizabad remain suspended creating problems for the people. Till date, police have registered at least 17 cases against the protesters including assault on security personnel. The right-wing bodies have vowed to continue the sit-in protest until law minister Zahid Hamid tenders his resignation for a ‘clerical mistake’ in amendment that was brought to Elections Act 2017. In the then revised form-A of nomination papers, the words “I solemnly swear” were replaced with “I believe” and the clause relating to Khatm-i-Naboowat was made applicable to non-Muslim candidates. However, the change was branded a clerical mistake by National Assembly speaker Sardar Ayaz Sadiq and the government had vowed immediate rectification of the alleged mistake. The Senate had approved reversal of the changes last week. However, the protesters who camped in the outskirts of Islamabad and at Faizabad M2 interchange late October are adamant for the law minister to resign.