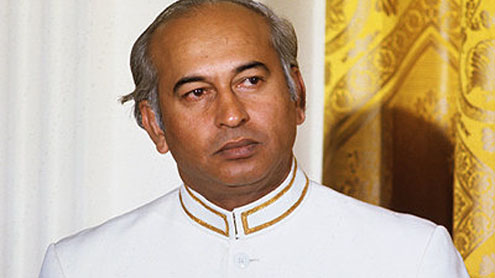 The 35th death anniversary of Pakistan People Party (PPP) founder late, Zulfiqar Ali Bhutto is being observed today. Arrangements have been finalized for the huge gathering to be held at Garhi Khuda Baksh town in Larkana, with a pledge to continue Zulifkar Ali Bhutto mission and strengthen the democratic norms in the country. People from different parts of the country have started reaching the town where main function will be held after Friday prayers amid tight security arrangements.

A public meeting will also be held there which will be addressed by PPP Chairman Bilawal Bhutto Zardari, Co-Chairman Asif Ali Zardari, Sindh Chief Minister Syed Qaim Ali Shah and other leaders. Born on January 5‚ 1928 Zulfikar Ali Bhutto laid the basis for the democratic process in the country with the formation of Pakistan People’s Party on November 30‚ 1967. Bhutto made country’s defence impregnable by starting nuclear programme. He made possible the consensus enactment of constitution of 1973. – SAMAA