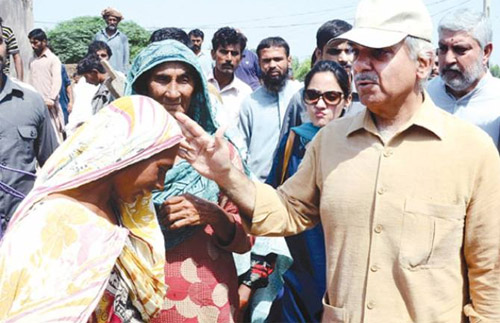 Punjab Chief Minister Shahbaz Sharif has said that Imran Khan and Tahirul Qadri have spent billions of rupees on sit-ins in Islamabad. He said that it would be better if this amount had been spent on helping the flood affectees.

He expressed these views while addressing flood affectees during his visit to flooded areas of district Jhang and nearby villages Athara Hazari, Ahmedpur Sial, Bhochra, Kot Shakar, Jandana, Jogaira and Garh Maharaja on Tuesday.

The chief minister spent his birthday today with the flood affectees of Jhang. Replying to a question, he said that the poor people are his family. Media men congratulated Shahbaz Sharif on his birthday. Shahbaz Sharif said that he had appealed to those staging sit-ins many times to come out and help the affectees but they had become stonehearted. He said that people were drowning in water but Imran Khan was busy dance functions in Islamabad.  Addressing Khan, the chief minister said that these poor villagers are your Pakistani brethren. Are you not worried that these people are drowning, he questioned. He said that Qadri who belongs to Jhang should have come to Jhang for sympathising with the people.

He said that people would never forgive Imran Khan and Tahirul Qadri for the way they have ignored the flood affectees.  The chief minister said that those staging sit-in have shown worst apathy towards flood affectees and they did not care about their distressed brothers and sisters marooned in flood. He said that the conspiracy of London plan had been exposed. He said that the aim of Imran-Qadri London conspiracy was to stop the Chinese investment in Pakistan and people have become aware of their nefarious designs.

He said that Imran Khan, Tahirul Qadri and Ch Brothers are important character of London plan.  The chief minister told the affectees that process of payment of financial compensation would start in Punjab from September 27 and a sum of Rs 25,000 each would be given to affected families. He said that second installment of the compensation would be paid by October 20.

He said that federal and Punjab governments are jointly spending a sum of Rs 15 billion on providing financial help to calamity-hit people.  He lauded the efforts of philanthropists, Pak Army, Navy, Rescue 1122 and district administration to serve the humanity in the hour of distress and said that they will be rewarded by Allah Almighty. The Chief Minister said that people have given honor and respect to elected representatives by giving them their votes, therefore, it is their duty to make all out effort for help and assistance of calamity-hit people in this hour of need.  He also went to villages Jogaira and Jandana and met the flood-hit people. He inquired from them about the provision of food and other relief items. He directed concerned authorities to accelerate the process of rehabilitation of flood affectees as well as repair and reconstruction work so that every affected village could be reached.

He said that in the absence of ground link, helicopters and boats should be used for supply of relief items.  The chief minister issued instructions to solve the problem of land erosion by River Chenab at Jogaira and said that a comprehensive planning be made for saving the villages from inundation in future.

Shahbaz Sharif also went to Athara Hazari and nearby village Jandana and inquired from the flood affected people about their problems. Addressing the affectees, he said that arrangements were being completed for the provision of financial assistance to the flood-hit people. He also inspected relief camps at Garh Maharaja and asked the affectees about their problems. He directed the administration that hundred percent vaccination of cattle be ensured while shortage of necessary medicines should be removed. -nation