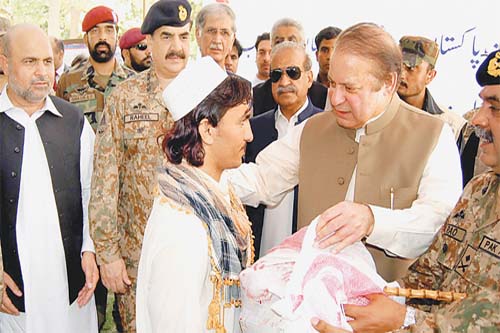 The federal government is deliberating upon establishing two separate funds for rehabilitation of IDPs (internally displaced persons) and flood affectees with the contribution and active support of different countries and international organisations.

The government is likely to announce the establishment of two funds during the second donors’ conference to be held by the end of current month (October).

The government will present the Recovery and Damage Need Assessments report in the donors’ conference for flood affectees and IDPs, which is being firmed up by relevant agencies. Pakistan in early October held first donors conference to brief the participants about initial losses due to the floods and rehabilitations of IDPs. The government had estimated that resettlement/rehabilitation of IDPs alone needed USD 2 billion. However, estimates of losses occurred due to the floods had not been finalised as yet. It is worth-mentioning here that the government had appealed to international donors for funds to carry out reconstruction and rehabilitation in the areas devastated by the recent rain-induced floods, as government believed that it could not afford the financial cost of the rehabilitation.

The idea of establishing two separate funds for the rehabilitation of IDPs and flood affectees was shared by Finance Minister Senator Ishaq Dar with Philip Barton, British High Commissioner and Mr Richard Montgomery, Head of DFID. The finance minister exchanged views with the visiting dignitaries on efforts of the present government to deal with the issues of poverty alleviation, rehabilitation of the IDPs and relief work for the flood affectees, said an official handout released by the finance ministry. The finance minister told Mr Barton about his recent visit to USA. He told Barton that he had a number of high-level meetings and also attended the all important Diamer-Bhasha Conference. Dar said the project would receive positive response from different funding institutions.

Dar said, “Although the sit-ins negatively impacted many of the transactions which were of vital importance for Pakistan, we have taken up our work for revamping of the economy with even greater zeal. We are expecting two tranches from IMF in December and hoping to complete the OGDCL transaction and sale of Sukuk bond very soon and this would improve our reserves situation and the balance of payments.”

Richard Montgomery, talking to the minister said, UK was expecting Pakistan as well as the rest of the world to work on the projects of regional co-operation specially CASA 1000 Project.  The project, on the basis of its potential, would receive financial support internationally, he added. Finance minister remarked that Pakistan was also desirous of extending its economic ties with the neighboring countries and hoped the new government in Kabul would be friendly to work with Islamabad.

Montgomery also said that they would continue to support the income support programme in future as well but also wanted its outreach to be expanded from the current 4.5 million people to 4.8 million people.  The finance minister said that the income support programme was close to his heart and he would ensure that it is managed and run in a fair and transparent manner. The meeting was attended by Rana Assad Amin, Advisor Finance Division, Shahid Mahmood, Additional Secretary Finance Division and others. -nation