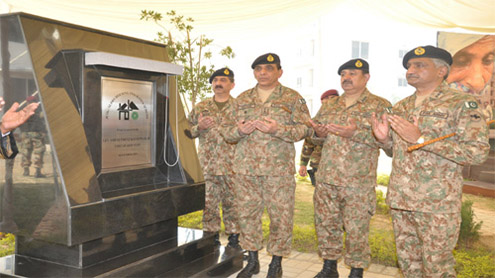 Formal invitation letters have been sent to the heads of armed forces, Leader of the Opposition in the National Assembly Syed Khurshid Shah, leaders of various political parties and other high officials to attend the dinner. General Kayani’s tenure as army chief ends on November 29, after six years of his services as head of the powerful military. Separately, General Kayani inaugurated Housing Insurance Scheme for soldiers in Lahore on Tuesday.

Paying tribute to martyrs, the chief of army staff said that army had launched this scheme in 2011, particularly for the loved ones of those who had laid their lives in service of the country. Scheme envisages construction of 3,000 flats by 2015. In Phase-I of the project, construction of 800 flats has already been completed. Later, the chief of army staff addressed the Garrison Durbar also.

Appreciating the contributions and sacrifices of officers and men, he said that the Pakistan Army, as a national institution, has discharged its responsibilities in the most befitting manner. He expressed satisfaction over combat readiness of Pakistan Army and its state of morale.

Recounting his experience spanning well over four decades in uniform and six years as chief of army staff, he said that it was an honour to be associated with such an honourable profession. He advised the officers, junior commissioned officers and soldiers to continue pursuing their professional undertakings with the spirit and passion characteristic of Pakistan Army. -Dailytimes