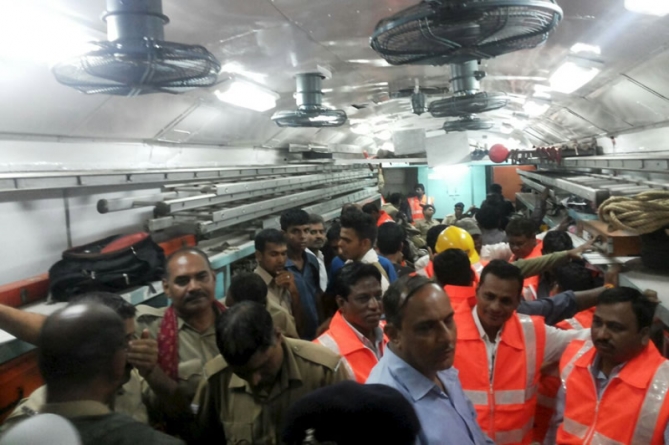 Two passenger trains derailed after being hit by flash floods on a bridge in central India, killing at least 27 people in the latest deadly accident on the nation’s crumbling rail network.

Rescuers have been searching through the night for passengers trapped on the trains that toppled when a swollen river struck the tracks in Madhya Pradesh state, railway officials said.

Roughly 300 people were rescued after about 10 of the trains’ carriages derailed outside the town of Harda at about 11.30 pm (1800 GMT) on Tuesday, police and other officials said. A passenger described how water poured into the carriages in the minutes after the accident. “Water filled the coach till here,” the unnamed man told a regional TV station, gesturing to his waist. Another said there was “a sudden jerk and the carriage broke and people were crushed under that”. Television footage showed carriages lying on their sides in a field of mud and medical supplies piled on a nearby station platform. “There have been 27 deaths due to the accidents,” Madhya Pradesh railway police chief M.S Gupta told AFP. “All the coaches have been cleared and all bodies have been collected from inside,” he said, adding that the death toll could still rise slightly.

At least another 25 people have been injured and taken to hospital, other rescue officials said, adding that carriages were not feared to have sunk in the river. The Kamayani Express travelling from the financial city of Mumbai appeared to have been hit by a sudden surge of water on the swollen Machak river, derailing the last four to five carriages, railway ministry spokesman Anil Saxena told Indian television. The Janata Express, travelling to Mumbai from the eastern city of Patna, was also hit by the water, with the engine and the first two to three carriages derailing, he said. “There is some suggestion of flash floods on the tracks that caved the tracks. Most of the coaches had passed but the last few carriages were derailed,” Saxena said of the first train. Rescuers with specialist cutting equipment and diving suits have been deployed along with doctors to the accident site.