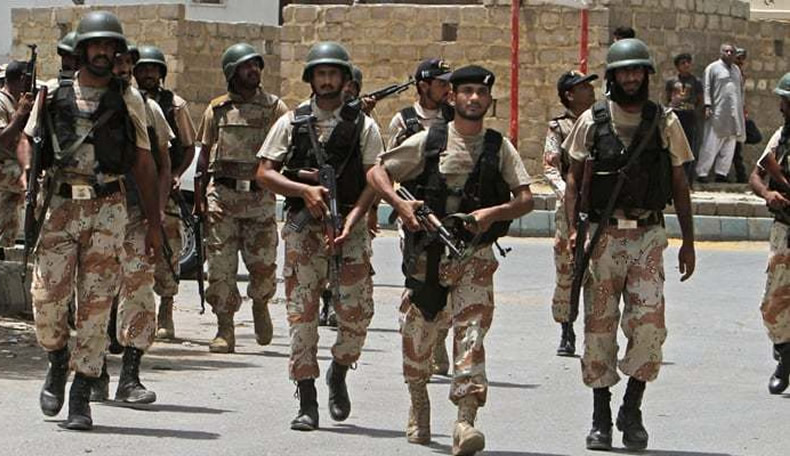 Rangers operation in Punjab on the cards

The Pakistan Rangers, Sindh, have approached Muttahida Qaumi Movement (MQM) leader Dr Farooq Sattar to get the custody of more than 180 suspects of targeted killings allegedly associated with the party’s ‘militant wing’ and involved in the murder of policemen who took part in the 1990s Karachi operation, it emerged on Tuesday.

A letter sent by the Rangers carried the names of 187 targeted killing suspects nominated in dozens of FIRs registered against them for killing policemen.

Copies of the letter were also sent to Sindh Chief Minister Syed Qaim Ali Shah, the inspector general of police and the home secretary. In the letter, the Pakistan Rangers stated: “During the period of early 1990s, the operation of law-enforcement agencies were undertaken to apprehend the criminals involved in violence. “The police officials who took part in the operation were later targeted and killed. It has been learnt that 187 individuals of the militant wing of the MQM were nominated in the FIRs of those killed police officials.” The letter also recalled Karachi’s violent history, calling it victim of politico-ethnic violence in the past.

The Rangers said the precarious law and order situation was not a new phenomenon for the metropolis. “Please hand over the nominated suspects to the Pakistan Rangers, Sindh, in order to [facilitate the] investigation of murder of police officials,” said the letter without explaining the reasons for making such a request to the party leader for their arrest instead of making their arrest by exercising the powers the Rangers have been enjoying for the past several months. Attached with the letter is the list carrying the names of the suspects and the details of targeted killing cases they were wanted in. Some of the suspects, according to the Rangers list, are wanted in four cases of policemen’s targeted killing.

There is no word from the MQM over the Pakistan Rangers, Sindh, letter. Senior MQM leader Dr Sattar denied having received any such document from the paramilitary force. Talking in a private news channel talk show, member of the national assembly Dr Sattar said he was not even aware of any such communication between the two sides in recent days. The Pakistan Rangers, Sindh, on Tuesday warned that some “militant wings in the garb of political parties were hatching conspiracies against the ongoing Karachi operation” and asked the people of Karachi not to pay heed to any ‘rumours’ against law enforcement agencies. In a statement the paramilitary force’s spokesman also asked the people to inform the Pakistan Rangers and advised the media to avoid broadcasting unconfirmed reports.

“Certain unscrupulous elements, under the garb of political parties running their militant wings in a desperate attempt have launched a campaign to malign the Karachi operation,” said the brief statement without mentioning these ‘elements’ and their move which forced the Rangers to issue such a statement. “These attempts are meant to create restlessness among the citizens. The people and media are requested not to pay heed to rumours against law enforcement agencies which are busy bringing peace and normalcy to the city. The people are appealed to immediately contact Sindh Rangers via toll free number 1101 in case of any unusual development in their respective areas.”